Holmwood House in Cathcart reopens to the public this week after a three-month project to recreate the property’s original stencilled paint schemes. 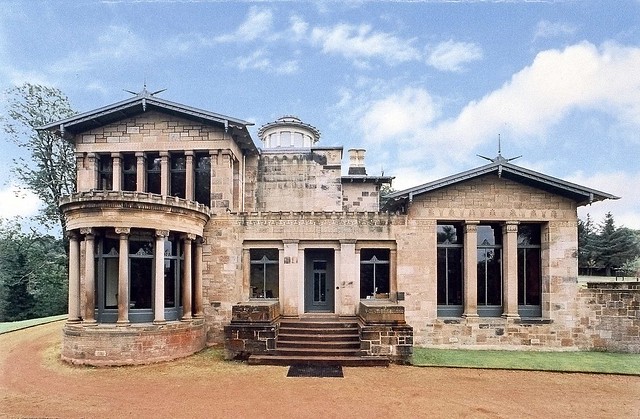 Created in 1858 for paper magnate James Couper, the house is widely regarded as the finest residential example of Alexander ‘Greek’ Thomson’s architectural vision and interior designs.

Conservation charity, the National Trust for Scotland, took ownership in 1994 and in the course of renovation discovered Thomson’s original decorations surviving intact under layers of wallpaper and paint, applied over the years by the house’s former owners.

The Trust began an extensive programme of research and investigation to uncover these original schemes and is re-creating the splendour of Holmwood as it was designed by Thomson.

These highly colourful and intricate stencilled walls are rare examples of Thomson’s interior design schemes. They are the most complete and most detailed of his work known to have survived, showing Thomson’s whole-house approach to architecture and design.

The latest phase of this project has recreated the scheme in the main entrance hall, interior stairway and large central cupola, based on surviving evidence.  Visitors can see samples of the original nineteenth century work, where conservators have scraped back the years of paint, and the re-created schemes show how Thomson intended the spaces to look. 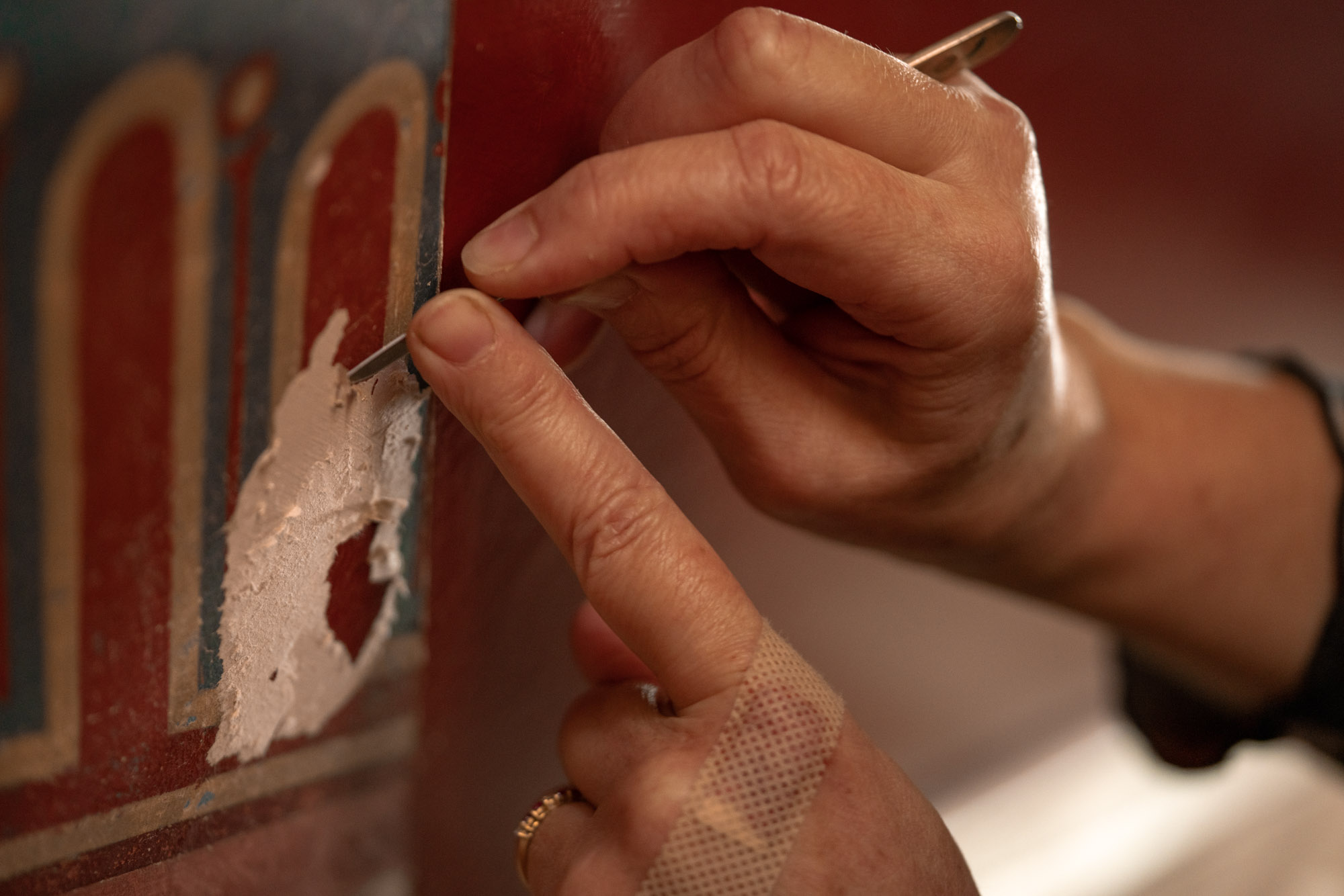 Emma Inglis, curator (Glasgow & West) at the National Trust for Scotland, said: “The transformation of the hall and stair is amazing. We always knew Thomson’s scheme for this area was beautiful, if the paint scrapes were to be believed, but now that it has been recreated throughout the space it reinforces just how good Thomson really was. Visitors will not see anything else like it in Scotland.”

The remainder of the walls were then covered in lining paper and the newly created decoration added on top. The process of peeling back layers of decoration to reveal the original paint schemes is very slow, with wall painting conservators using scalpels to peel back one layer of paint at a time.

The redecoration work has been carried out by restoration painting specialists Robert Howie & Son who have previously worked on Holmwood’s entrance hall and dining room. The Mauchline-based team used the ‘windows’ to trace the stencil designs and then cut their own stencils by hand. The colour mixing of the paint is all done on-site based on the original colours.

Paint layers of melted rabbit skin glue on the cupola provide a natural and reversible barrier between the old paint layers and the new, and some elements of the cupola are gilded in gold leaf – another traditional decorator’s skill. 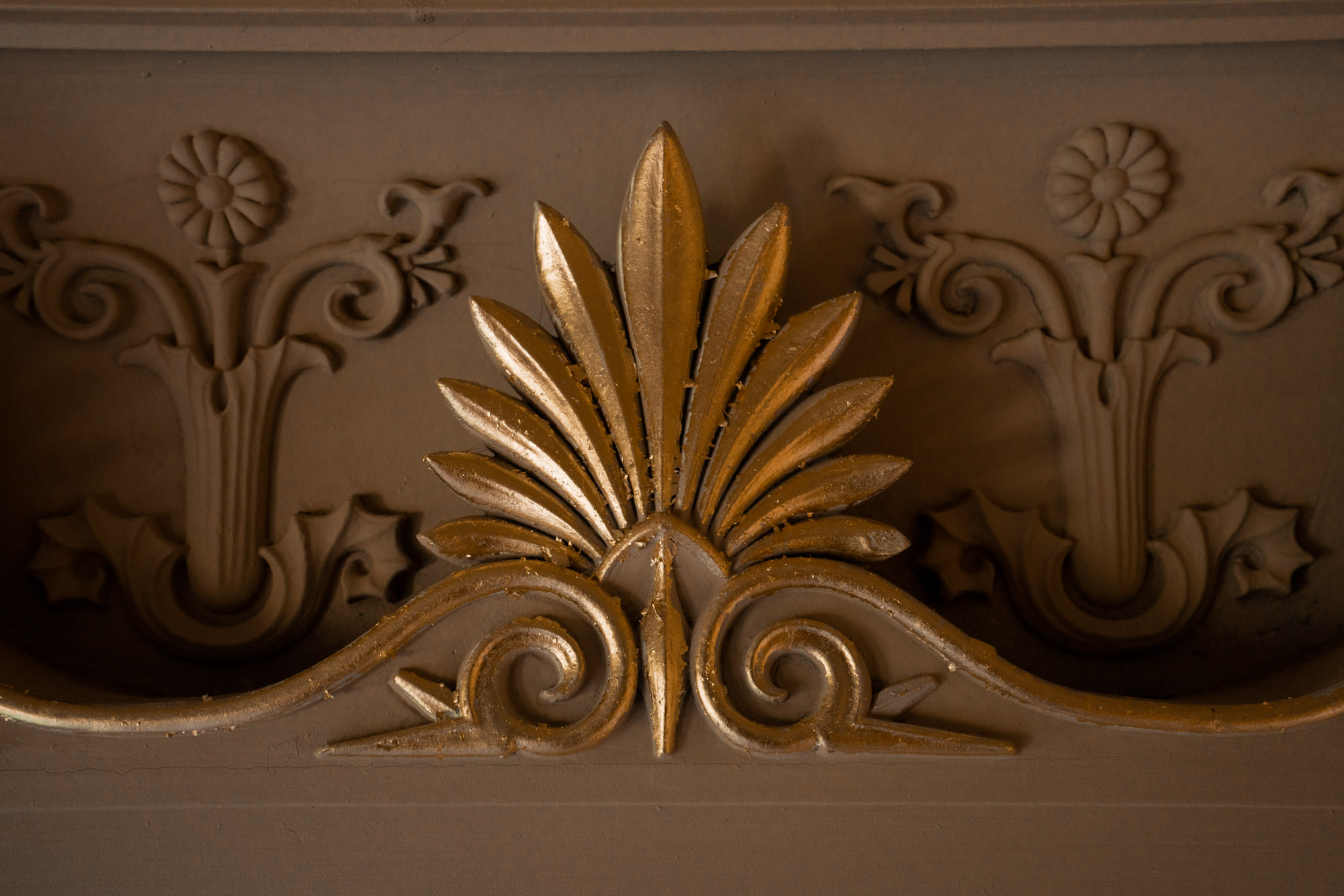 As well as using the ‘windows’ to see the original designs, the Trust’s researchers used a number of sources to reproduce Thomson’s schemes as accurately as possible. Samples of paint have been sent for lab analysis to give a clear understanding of the layers that have built up over time and the sequence in which they occur.

Photographs of other Thomson interiors, such as St Vincent Street Church, and paint scrapes in other Thomson buildings, including his own house, add to the Trust’s understanding of the way he combined colour and pattern and his frequently used motifs.

The evidence being found is supported by information published by Blackie & Son in Villa and Cottage Architecture, approximately 10 years after Holmwood was built, which includes a detailed description of the house along with design plates for all the principle spaces.

Karen Cornfield, operations manager at Holmwood House, said: “We are delighted to share our progress in bringing Holmwood back to its former glory with our visitors and members, many of whom have been loyal supporters of this project.”

The investigation and research at Holmwood is ongoing and the Trust hopes to return more rooms to their original schemes.  A fundraising campaign to raise £120,000 is ongoing and donations can be made at www.nts.org.uk/campaigns/holmwood-interior-recreation or in person at the property.