A car park, a swimming pool and a McDonald’s are just some of the most outrageous design proposals for the fire-hit Notre-Dame Cathedral in Paris.

Architecture magazine Dezeen has collated some of the most outlandish.

For Ulf Mejergren Architects, most proposals for the renovation “put way too much focus and effort” on the spire. Therefore the Stockholm studio wants to create a swimming pool in its place.

The firm said: “We think that the cathedral looks much better without both the spire and the led-clad roof. Instead we let the bell towers, the flying buttresses and the rose windows do the talking.

“Given that we’re in the epicentre of Paris, the world’s cultural capital and a city filled with joie de vivre, where not planning on rebuilding the roof as it was.

“Instead we are proposing a meditative public space; a complementary spatial experience to the building with unmatched views over Paris.

“The spire is gone, but the twelve statues of the apostles that where put away during the restoration and managed to escape the fire, are once again back at the roof, now as guardians around a large public pool that occupies the whole roof.

“Maybe the pool will be replaced in a hundred years or so, becoming another layer of great stories for the future.” 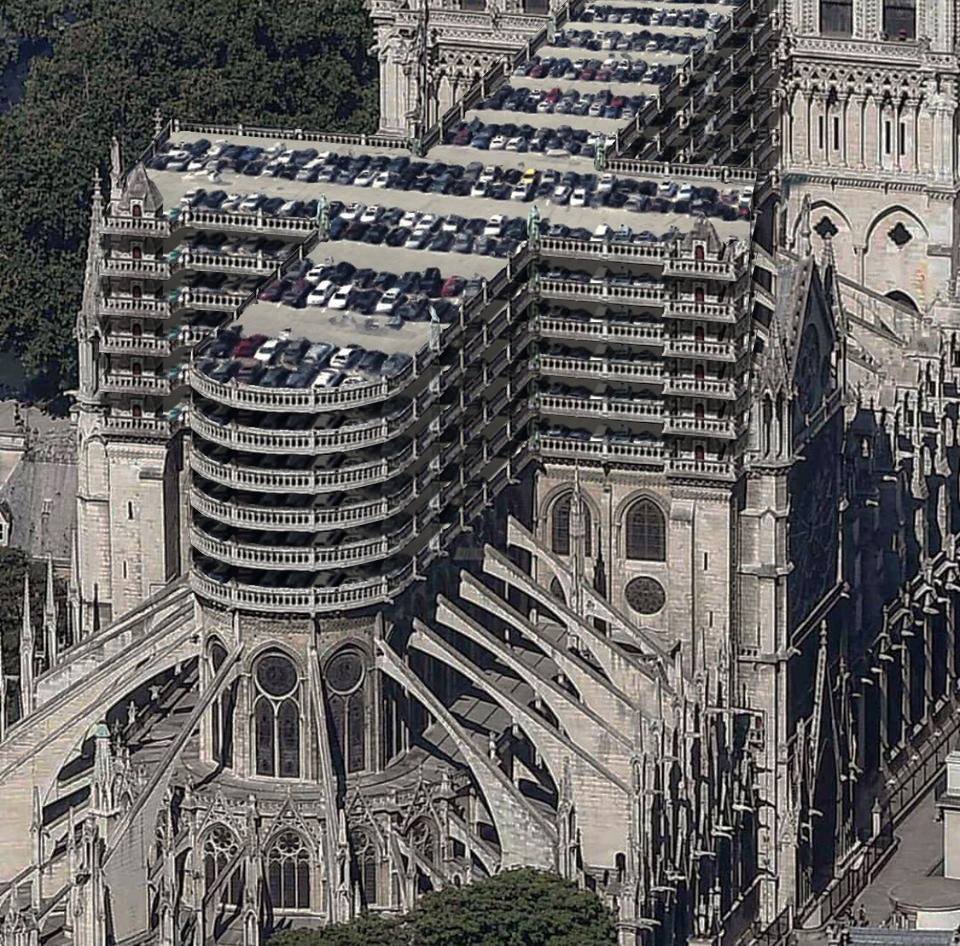 Meanwhile a post on a Facebook page entitled Trust Me, I’m an “Architect” unveils a proposal to make use of the space above the cathedral for a multi-storey car park.

The caption alongside the post reads: “When green roof and glass roof proposals are too mainstream.”

Pedro Ribs, art director at Brazilian studio Entrequadra Novas Mídias, has envisioned a Notre-Dame rebuilt by Moët Hennessy Louis Vuitton (LVMH), as a response to the corporation’s donation of €200 million to the cathedral’s renovation fund.

The project sees the cathedral rebuilt as it was before the fire, but with the Louis Vuitton print used across the roof and square in front of the west entrance.

The Louis Vuitton Notre-Dame would be complete with the fashion brand’s logo placed over the rose windows, and on flags flying from its towers and rebuilt spire.

The space on top of the cathedral would be better used as a rooftop penthouse for the fictional protagonist of Victor Hugo’s book The Hunchback of Notre-Dame, under plans by architects at Who Cares Design.

The studio said: “Due to the latest events from April 15th 2019 at Notre Dame in Paris, the most famous bell ringer of the world, the Hunchback of Notre Dame, has lost his home. His more than 600 years old accommodation, the attic of the famous cathedral of Notre Dame, burned down. His loss is tragic, but now it´s time for change.

“The Hollywood star Quasimodo, by now rich and famous thanks to the royalties from countless movies about him and his story, has already dreamed about changes to his housing conditions for several years. Finally, he can follow his dream of more comfort, light and a green rooftop garden.”

A post on Reddit sees the unthinkable plan for Notre-Dame to be turned into the world’s largest fast food restaurant.

Site user Szentgyorgyi Csabi’s visual shows the cathedral’s roof would be rebuilt in red, to match the roofs of McDonald’s typical restaurants, while the spire would be replaced with the Golden Arches.

Other designs envision Notre-Dame being turned into a monument to peace or a giant circus, with the roof replaced with a big top.