A seven-foot-long scale model of an offshore vessel made famous in recent film Tenet from Batman director, Christopher Nolan, has gone on display at an Angus port. 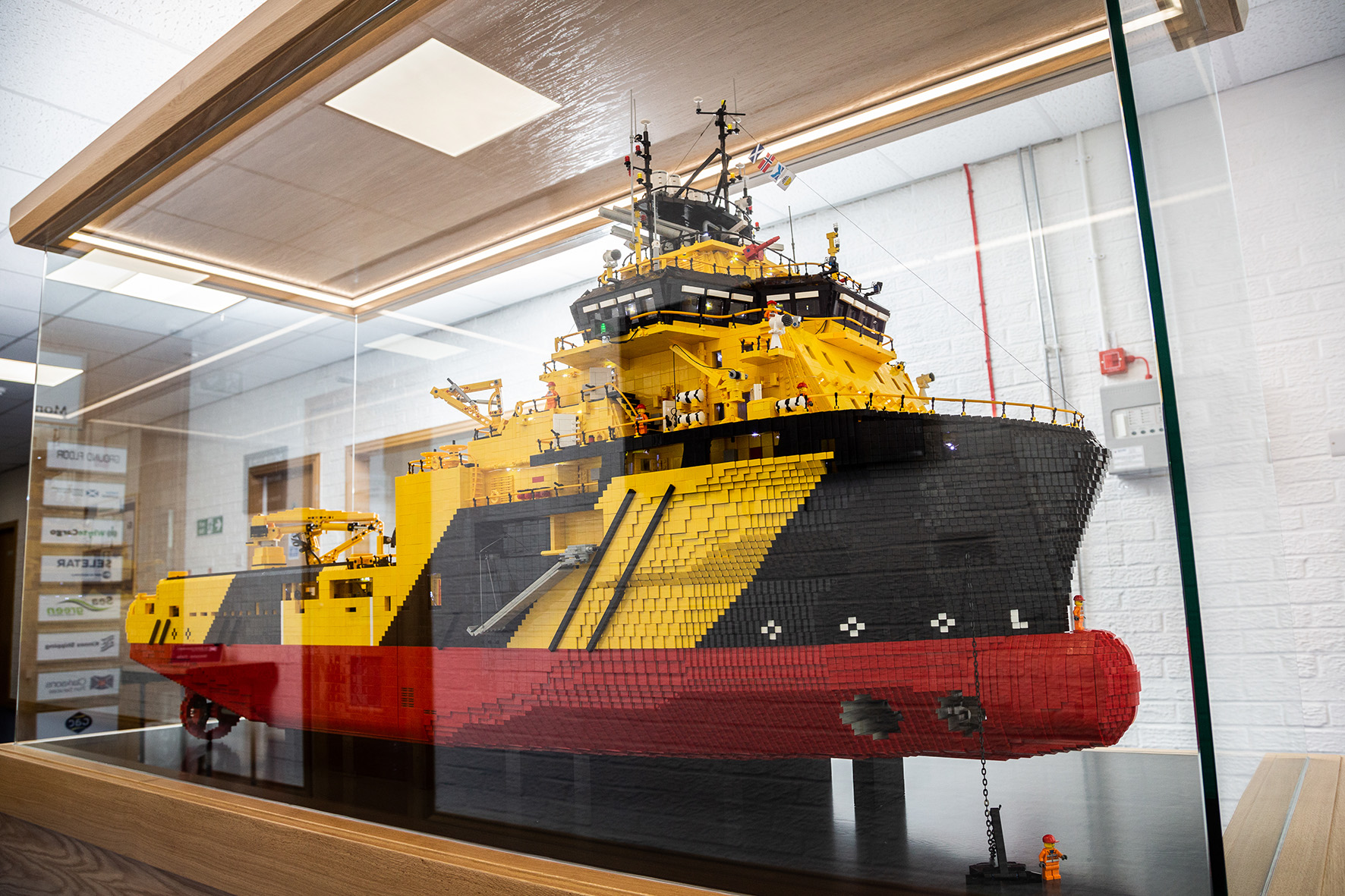 The giant, 1:37 scale replica of the Norwegian-registered Magne Viking vessel was created entirely from Lego bricks and is complete with realistic features such as retractable anchor chains and lighting on deck and in the bridge.

The model was commissioned by Montrose Port Authority and built by port employee Jim McDonough who lives near Arbroath and has already had his version of the Royal Yacht Britannia immortalised at Ocean Terminal, Edinburgh.

According to professional Lego builder Jim, who has been building with Lego since the age of 5, there are around 120,000 bricks in the Magne Viking model with no glue used so everything can be removed and replaced when required.

After a nine-month kitchen table build, the model has now been sealed in a bespoke glass cabinet in the reception area of the port’s South Quay offices with Montrose Port hopeful that school groups will soon be able to visit it.

Captain Tom Hutchison, CEO and Harbour Master at Montrose Port Authority, said: “We have been blown away by the detail that Jim has managed to include in the model and how realistic it is.

“There are a lot of mechanised features which can be controlled remotely from a tablet so we can use it for educational purposes to teach school pupils about how a vessel like the Magne Viking operates. We hope to be able to welcome school groups into the port again as soon as restrictions allow.

“With the ongoing construction of the Seagreen wind farm Operations and Maintenance Base and increasing levels of vessel traffic, including regular visitors like the Magne Viking, it is an extremely exciting time for the port and Montrose in general and we hope visitors are as amazed by this stunning model as we are.” 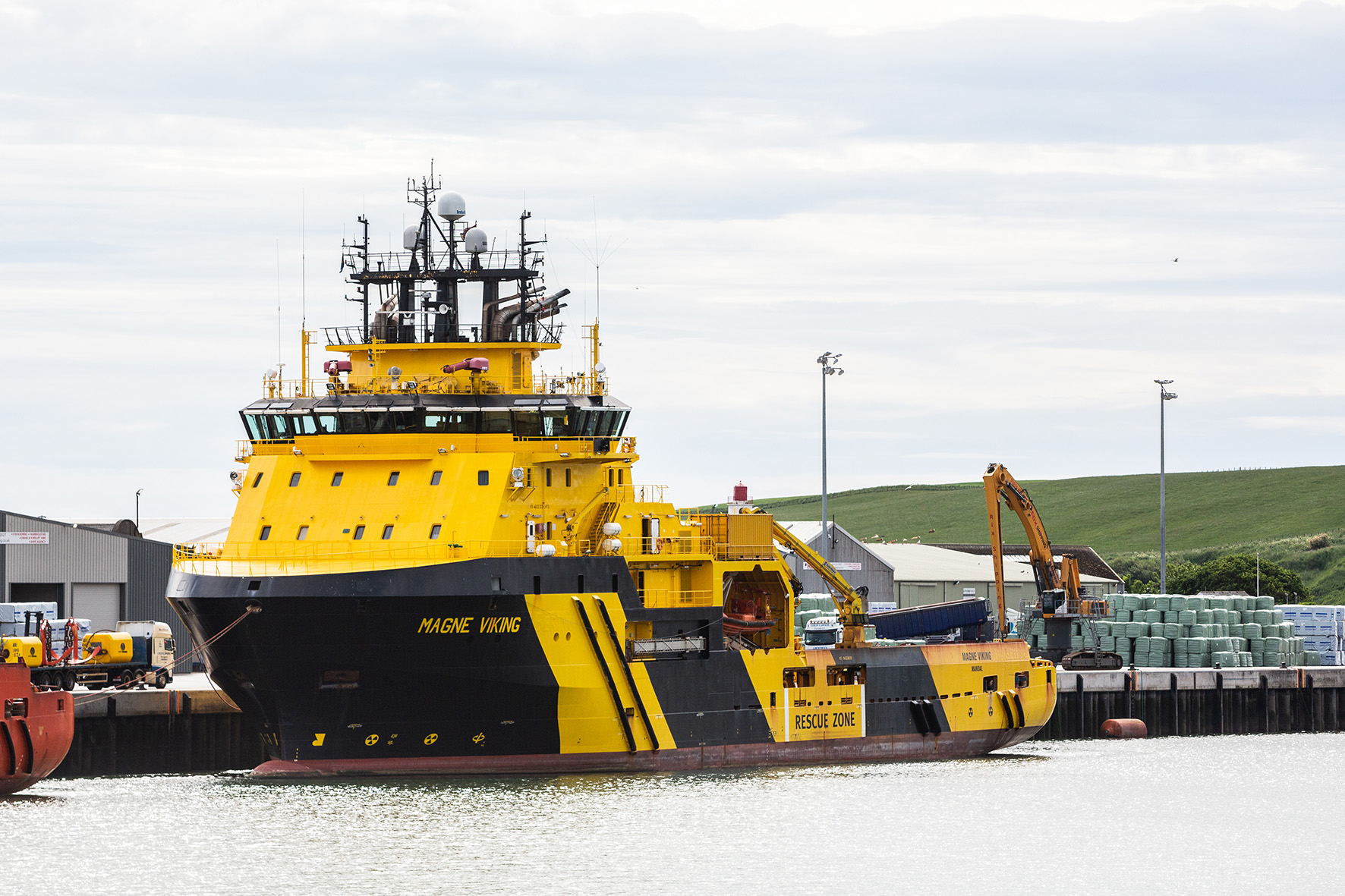 The Magne Viking is a regular visitor to Montrose Port which meant that Jim was able to go onboard the vessel when Covid restrictions allowed during the build as the only guide he had was the technical drawings of the vessel to work from.

There are a number of moving parts of the model which can be controlled by a specialist iPad app created by Hungarian start-up, Sbrick, meaning that many of the features of the vessel seen in Christopher Nolan’s 2020 film can be seen working on the Lego version.

Testament to the detail of Jim’s creation is the fact that the man in charge of the real ship said that he instantly recognised his vessel when looking at the model.

Markus Abrahamsson, Captain of the Magne Viking, said: “When I first saw the model in person, I was amazed at how big it was. The details are absolutely fantastic, it is beyond me how one guy can sit and build that from Lego.

“When I was shown how everything works, such as winches, etc. I was even more impressed - I think that it really has to be seen several times to appreciate all the details.”

Due to Covid, it is not currently possible to visit the model, however the Port hopes that in future it will be able to welcome school groups into the building to see it.