Locals and visitors to Gullane are a big step closer to enjoying a safe, four-mile pathway to the nearest railway station thanks to CALA Homes (East). 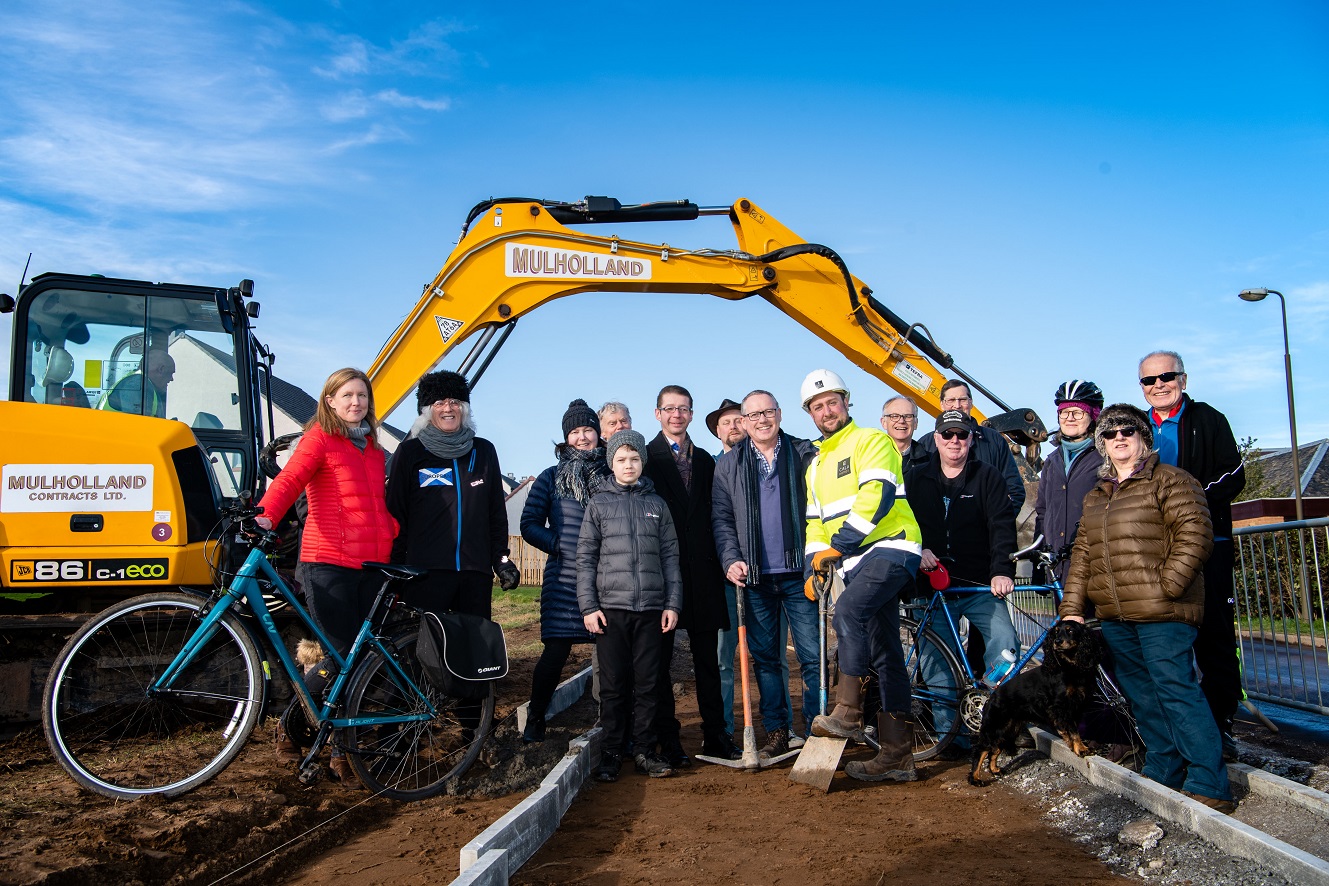 For 15 years the Drem-Gullane Path Campaign has been calling for an off-road path to take pedestrians and cyclists away from the busy B1377 and has built widespread support from a cross-section of the community.

Now the group has cause for long-awaited celebration, with the first stretch of the path officially underway, courtesy of CALA Homes (East), at its Marine Rise development in the village.

In the coming weeks, CALA will build the first quarter mile, of a one mile stretch starting from the corner of Fenton Road and Main Street, eventually stretching the length of the C111 to West Fenton.

CALA is simultaneously progressing plans for the remaining first phase, with the path also continuing on land at upcoming developments Fentoun Meadow and Saltcoats.

The company, which moved its head office from Errol to the former Edrington building in West Kinfauns last year, saw its revenues increase by 6.6% to £93.4m for the year ending April 30.

Part of the sales rise was attributed to its acquisition of Surrey-based Chertsey Plant Hire Limited, which added around 500 machines to its fleet.

However, pre-tax profits dropped from £3m in 2018 to £1.3m last year which group operations director Graham Ogilvie said was related to Brexit uncertainty.

Employee numbers rose from 316 to 341 during the year across all divisions.

Construction of the Great Tapestry of Scotland visitor centre’s eye-catching roof is nearing completion, ahead of the landmark facility’s opening in spring 2021. 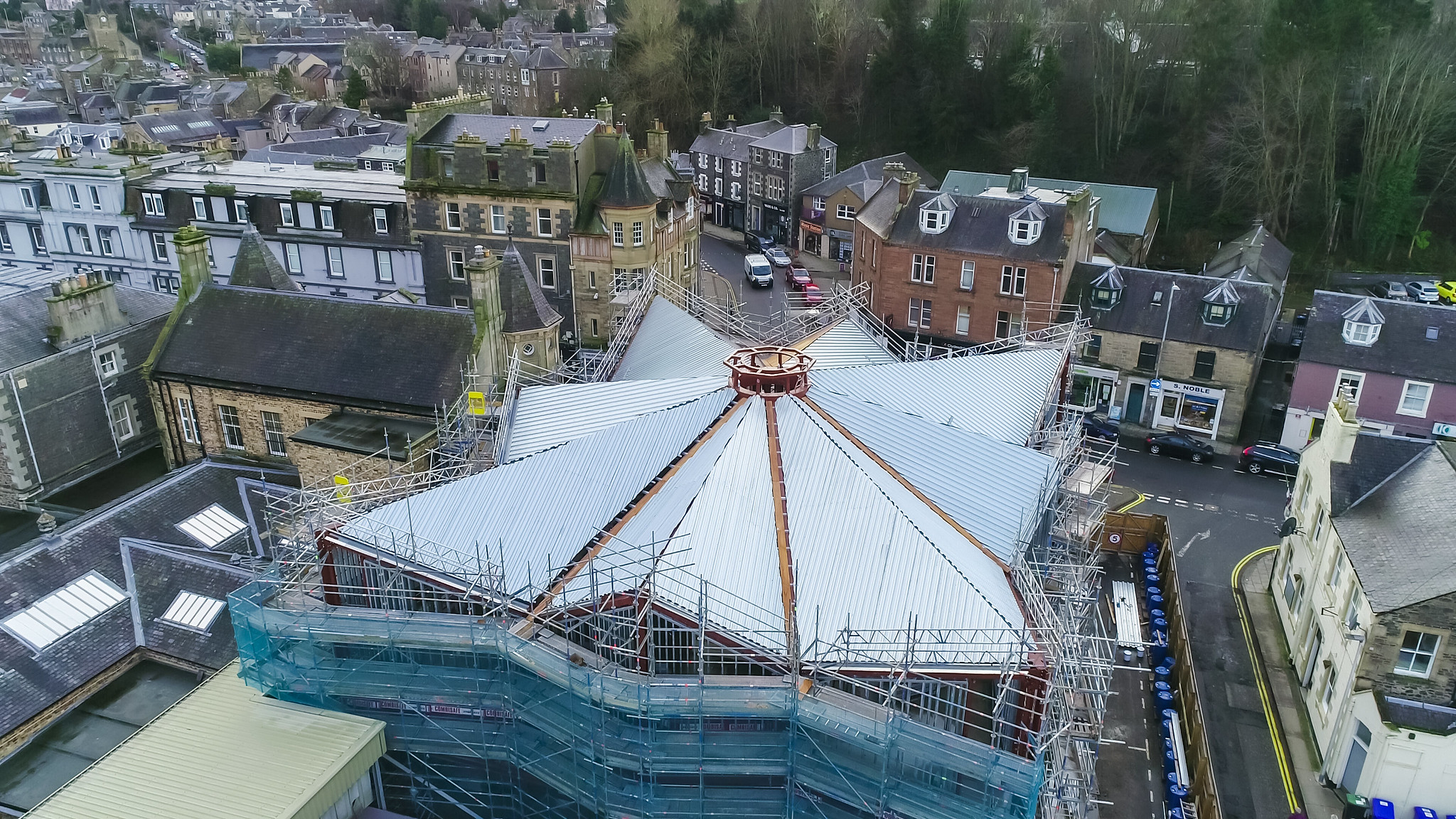 The interactive visitor centre is being built by Ogilvie Construction, and once opened will aim to kick-start the regeneration of Galashiels.

New drone images show the progress made with the roof and walls of the building, which are expected to be in place later this month, and alongside installation of the windows, the landmark facility will be wind and watertight. Metal decking and concrete flooring are also now in place.

The building which will house the Tapestry has been designed by Page\Park, while the adjacent former Post Office will be re-purposed to bring the B listed building back into use. There will also be retail, café, educational and touring exhibition space, as well as an ongoing events and exhibitions programme.

The project, and the regeneration of Galashiels, is being led by Scottish Borders Council with support of the Scottish Government, through the Borders Railway Blueprint programme, as well as community groups such as Energise Galashiels Trust.

Aberdeenshire Council has, on behalf of the Peterhead Development Partnership, formally accepted a tender for eagerly-anticipated enhancement works in the heart of Peterhead.

At a capital cost of £285,000, the Public Realm project in Drummer’s Corner will see the installation of a new raised performance area and upgrades to seating, lighting and electrical points, with added new artwork improving the aesthetics of the town centre precinct.

The Drummers Corner proposals are the result of widespread consultation with the community through the Choose Peterhead process and the Peterhead Development Partnership.

The design for the triangular area has been produced by TGP Landscape Architects, with assistance from local architects McAdam Design, working to a design brief set by the Peterhead Development Partnership, as well as ongoing local consultation.

The project team has sought planning permission for the works after it was indicated that the value of works may be above the permitted development threshold, as well as securing a building warrant for the Drum structure.

A significant grant sum of £145,000 for the works has been provided by the Scottish Government Town Centre Fund towards the project for spending by autumn 2020, resulting in less having to be funded through the Peterhead Regeneration Vision and Action Plan.

This contract is being awarded to KW Contractors of Bridge of Don, Aberdeen.

With the tender process now completed, it paves the way for works to begin in March with works largely completed by this summer’s Peterhead Scottish Week, weather permitting.