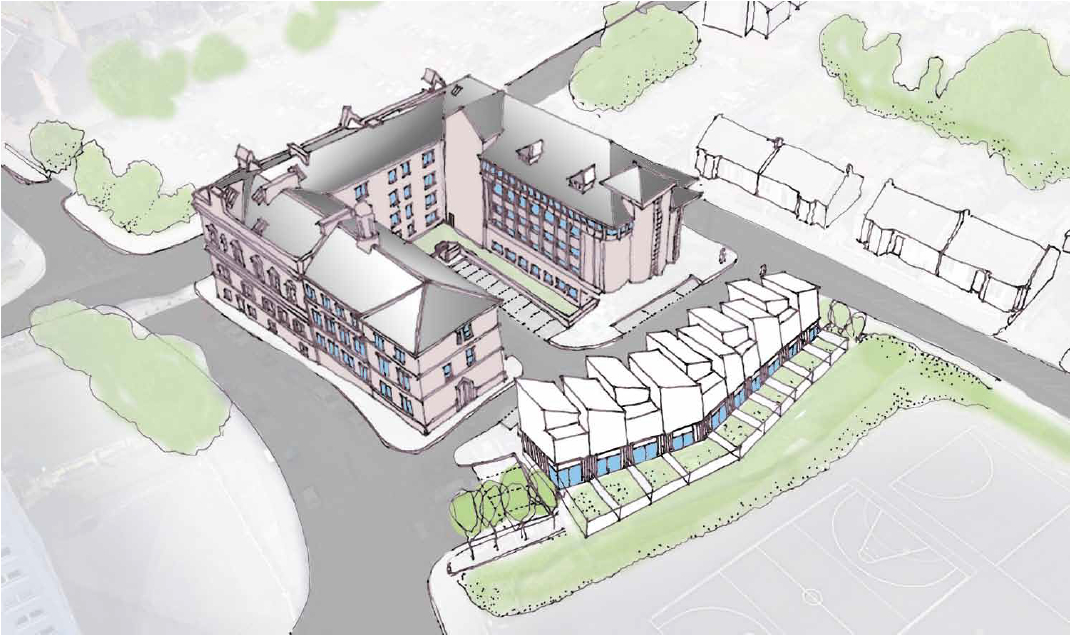 Demolition plans for the Orrs building in Airdrie are now in place with construction beginning this spring, and the council’s housing and regeneration committee approved a contract for detailed design development work at the former Municipal Buildings in Coatbridge.

The Orrs building is one of the most prominent locations in Airdrie town centre, and its demolition will make way for a mixed development of new housing and commercial units, breathing life into the South Bridge Street site.

The council has committed to buying 20 new homes from developer Wilson Developments Limited, as part of the council’s new housing supply programme. Work on this site is expected to be completed by summer 2022.

North Lanarkshire Council’s housing and regeneration committee agreed to award a contract for the detailed design development work at the former Municipal Buildings.

The award of this contract will see detailed design proposals progressed for the conversion of this listed building to deliver around 49 hew homes (including some new build).

This development has also seen agreement that the former burgh chamber, committee room and associated offices will be retained and converted for touch down and office space for council employees and linked to the adjacent school hub.

Plans for ten new affordable homes in the north-east village of Insch have been approved by Aberdeenshire Council.

Developer Drumrossie Land Development Co Ltd applied for permission for the homes on land At South Road in Insch last May. The firm is working alongside Castlehill Housing Association on the project.

The development would comprise of three and four-bedroom homes and a planning statement said each one would have its own garden.

The document said: “Each property will benefit from a degree of private amenity space, as well as access to a large area of dedicated open space immediately adjacent to the proposed properties.”

It added that the new family homes were “much-needed”.

The Network Rail team behind the proposed station development at East Linton attended a public meeting to discuss the project and answer questions from members of the community.

Held online and organised by Councillor Paul McLennan, the meeting provided a platform for more than 30 people to raise any concerns and get a response directly from the team proposing the development.

The discussion was wide ranging with questions being raised covering; vehicle access to the station, access paths, proximity of primary school, the station footbridge/lifts and car parking. There were also questions on all aspects of the construction work required to deliver the project and when the work will be completed and the station open to the public.

With many of the issues being discussed subject to planning and funding decisions the Network Rail team were unable to offer clarity on all of the questions, however the meeting did provide another valuable opportunity to engage with the wider community and listen to the concerns being raised. Previous similar meetings have resulted in changes to the proposal prior to the planning application being made and Network Rail is encouraging everyone locally to share their views through East Lothian Council’s planning process.

Network Rail submitted a planning application for the development in December 2020 and it is presently being considered by East Lothian Council and it is open for public review and comment here.

Construction of West Lothian’s very own canal marina is underway.

The civil engineering firm, I&H Brown, have been on-site getting the work started at Winchburgh. Up to 20 barges will be able to moor in the marina and will be supported by a Scottish Canals facility on site.

Restaurants and cafes will sit alongside the water’s edge and in time 29 further moorings will be available along the canal. Plans have been unveiled for 64 new homes in the area that will feature stunning canal views.

A spokesperson from Winchburgh Developments explained: “The community has been involved with the canal development from the start, marking the moments in history for many youngsters seeing this first new marina in Scotland for over 10 years being built in the heart of their community. Winchburgh will provide for an active lifestyle through enhanced environments bringing the outdoors right to your doorstep.”

A Scottish hotel group is preparing to emerge from lockdown with a six-figure investment in the Highlands.

Crerar Hotel Group is investing more than £500,000 in The Glencoe Inn, with bedrooms, restaurants and outdoor areas of the four-star highland property revamped in preparation for re-opening following lockdown. All 15 bedrooms and bathrooms will be refurbished with king-size beds and baths that give views across Loch Leven and the Pap of Glencoe.

The outdoor Hidden Garden spa will have a hot tub and sauna, while a new deck area with fire pits comes alongside a new bistro, with a menu featuring Scottish beef from the Crerar Home Farm and pizzas made in a new outdoor wood-fired oven.

Work will take place to spruce up Ayr’s biggest roundabout next month.

New kerbing will be laid at Whitletts at a cost of £7000 with work taking place over five nights at the start of March.

Teams from Amey will be on-site each night from 7pm to 7am between Monday, March 1 to Friday, March 5 to install the new infrastructure.

It is estimated the scheme will benefit around 7300 vehicles and pedestrians who use the route each day by improving safety on the footway and for vehicles exiting the side road.

But politicians who approved the planning application don’t know the name of the firm, which is set to move into the Heathfield Retail Park.

It is understood the retailer will be new to the town.

Works to improve Beith Main Street are set to get underway following engagement with local residents and businesses.

Last year, locals were asked to complete a questionnaire detailing their views on the Main Street. Their feedback has been used to shape the works, which are expected to get underway next month.

The project aims to improve the streetscape of the town centre by resurfacing the central carriageway, replacing paving and street furniture and reinstalling road markings. It is being supported by the Scottish Government’s Town Centre Fund.

Feedback from the community has allowed the plans to be altered so that they balance the need for an attractive area alongside the unique challenges of access to businesses, as most properties cannot be entered from the rear.

The works are expected to take six weeks and due to get underway in March.

NBS, the specification platform for the construction industry, has announced its partnership with the British Board of Agrément (BBA) in its latest move to provide best practice advice to NBS users.

The collaboration marks the joining of two recognised industry leaders – the BBA, known for its role in helping to mitigate risk through setting high standards of quality and safety in the construction supply chain and NBS, a company rooted in improving industry and compliance through the adoption of digital data.

As well as allowing its users to gain a deeper level of guidance on BBA certified products, the alliance also strengthens NBS’ compliance offering, aiding specifiers and construction professionals in the decision-making process by providing timely and consistent data. Both companies also plan to work together on digital events such as webinars and discussion panels to enrich the debate on industry topics and help better support customers.