Aberdeen City Council co-leaders Jenny Laing and Douglas Lumsden today hailed the £23 million development work being undertaken across the city as new nurseries start to take shape in preparation for the rollout of extended Early Years Learning and Childcare hours later this year.

Work is taking place this year on 27 sites in the city, including completely new nurseries. The co-leaders visited the one at Seaton where the construction of a new nursery building by Robertson is underway.

Phases 1 and 2 will deliver re-modelling or extensions to schools and nurseries at Broomhill, Charleston, Culter and Cults, Loirston, Kingswells, Kingsford, Quarryhill, Tullos, Westpark, and Woodside, and new builds at Gilcomstoun, Kirkhill, Northfield/Cummings Park, Seaton and Tillydrone.

HGV traffic has significantly reduced on the A92 since the Aberdeen Western Peripheral Route/Balmedie to Tipperty (AWPR/B-T) project fully opened to traffic, according to a data snapshot released by Transport Scotland on the first anniversary of the project fully opening to traffic. 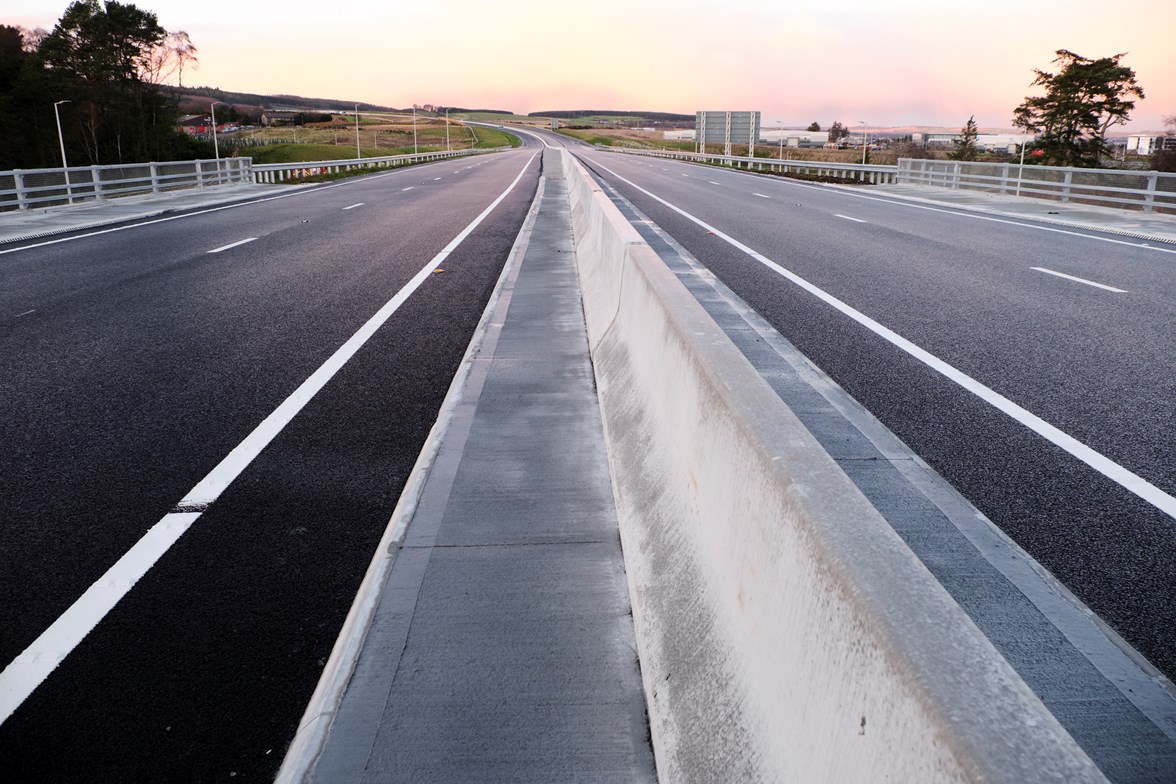 Depending on the location, HGV traffic along the A92 corridor through Aberdeen has reduced between 49% and 61% when comparing January to June 2019 data with comparable 2014 data.

This reduction is greater than the 20 to 36% reduction originally predicted and suggests that the AWPR/B-T may be more successful than anticipated in attracting HGV traffic from the local road network.

The data covers the A92 (previously the A90) from Stonehaven to Blackdog via Anderson Drive and The Parkway and vice versa.

Fife Council has marked the start of construction of new council homes in Inverkeithing.

The development at Spencer Fields is one of the council’s largest affordable housing projects and forms part of its Phase Three Affordable Housing Programme which is to deliver 3500 new affordable houses across all areas of the region.

The houses are being built for the council by developer Taylor Wimpey.

The development of 74 high quality new affordable houses are a mix of two, three and four-bedroom homes. They are a range of house types including bungalows and cottage flats that will make it possible for people who no longer need a large family home to downsize and allow a family who needs more space to move in.

Investigations have established that damage was caused to gabion baskets (stone-filled cages) at Richmond Row, likely due to large debris striking the riverbank during the heightened river levels.

As a result, the council is undertaking urgent repairs in an attempt to retain the necessary protection to 12 properties in Richmond Row, 11 of which belong to Scottish Borders Housing Association (SBHA).

A failure in the wall would present a high risk of the houses being severely flooded.

Responding to the threat of further rainfall last weekend, the council worked closely with SBHA to ensure that residents were updated on the situation, and that plans were in place should an evacuation be deemed necessary.

Pavement investigations start next week for A9 Dualling Crubenmore to Kincraig scheme.

Work is due to begin on Monday 24 February 2020 and is expected to take around six weeks, finishing by early April 2020 subject to weather conditions.

These pavement investigations will increase understanding of the existing road condition as the detailed development and assessment of the scheme progresses.

Taylor Wimpey East Scotland challenged the Primary 6 pupils of Dunbar Primary School to design a flag to mark the launch of its latest phase of new homes at its Albany Grange development in Dunbar.

The judges also picked five other commended flag designs who were awarded a £15 voucher each and a framed copy of their design.

Bellway Homes Ltd (Scotland West) took part in a recent careers fair at Calderside Academy in Blantyre and showcased the many different opportunities in the construction industry to pupils. 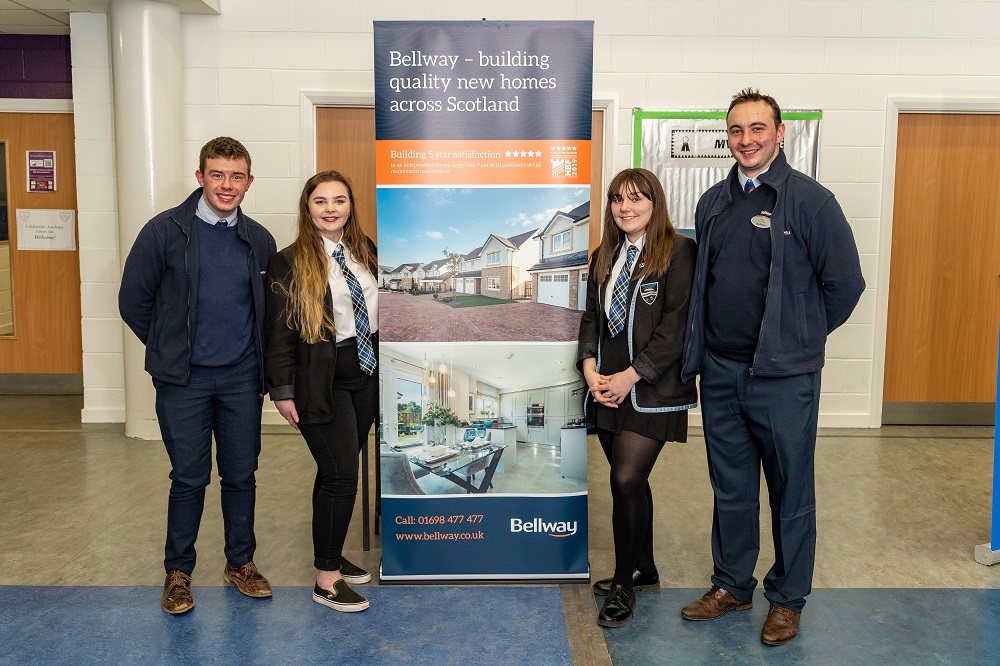 The housebuilder was one of twenty employers and further education providers from across different disciplines to take a stand at the event, which was open to pupils from first to sixth year and their parents.

The Calderside Academy careers fair is just one of a series of initiatives Bellway in Scotland has taken part in to promote opportunities for young people in the construction industry. Along with school talks and site visits, Bellway recently introduced a new graduate programme, along with a range of apprenticeships for school leavers.

Dundee City Council could be faced with making savings of £16.8 million to achieve a balanced budget for the financial year 2020-21.

As the council prepares to set its budget on March 5, councillors will be presented with a detailed breakdown of the authority’s financial position.

A report on the Local Government Finance Settlement 2020/21 and Financial Implications for the council details the proposed grant allocations from the Scottish Government and outlines the challenges faced by the council.

The report to the policy and resources committee on Monday February 24 explains how administrative and technical savings identified by officers will help to reduce the £16.8m savings requirement.

Councillors will also be told that the council’s ongoing financial strategy for 2020 to 2030 includes undertaking a review of resources to look at ways to deliver services more efficiently and effectively.

The strategy also outlines how there is likely to be a “significant reduction” in the workforce of the council, and how this is being managed through voluntary early retirement and voluntary redundancy.

Further, the reduction of grants that the council receives will be shared by all directly provided and commissioned services, including health & social care, Leisure & Culture Dundee and the third sector.

Residents in New Luce, Wigtownshire, are the first in Scotland to benefit from a programme to provide 4G to areas with no mobile coverage from any operator.

The mast is one of up to 24 scheduled to be rolled out over the next two years, with further mast sites under consideration.

Vodafone is now providing 4G, 3G and 2G services from the new mast. EE is expected to do so later this year, and will provide service from a majority of sites in the programme.

The Scottish 4G Infill (S4GI) Programme is backed by £15 million of Scottish Government funding and £10m from the European Regional Development Fund. It was set up in 2018 to address Scotland’s mobile ‘notspots’ – areas with no mobile coverage – and is being delivered by WHP Telecoms, managed by the Scottish Futures Trust.