A proposal to move Paisley Grammar School to a new-build community campus on the town’s Renfrew Road is going before councillors for approval next week.

Renfrewshire Council last year ran a six-week consultation where the school community and general public were asked their views on the plan for a new school on the former Chivas site.

And members of the council’s Education and Children’s Services Policy Board will next week consider the contents of the consultation - and whether to agree to move the school.

The current Paisley Grammar building has been assessed as in need of improvement, and the current site on Glasgow Road doesn’t allow room to expand.

A new community campus would let pupils and staff to move to modern accommodation with outdoor areas, state-of-the-art technology, and high-quality media, drama and sports facilities not possible on the current site.

The formal consultation demonstrated overall support for the proposals and officers have recommended councillors give the green light to the move.

It was confirmed in December Paisley Grammar was one of 25 schools across Scotland to receive funding from the Scottish Government’s £1bn Learning Estate Investment Programme, which - along with money already set aside by the council - would help fund the new building.

Should the proposal be approved next week, council officers would start work on the next stages of the work. It is estimated any new school wouldn’t be complete until at least 2025.

Planning permission in principle was granted in 2018 for a new settlement at Blindwells, the former open cast mine site bordered by Tranent, Prestonpans, Londniddry and Macmerry. The committee was asked to consider altering a condition that stated access roads for the site should be upgraded before any occupation of housing took place.

Planners and Transport Scotland agreed with the applicant that impact would be minimal when the first 235 houses on site were occupied. Instead, it was proposed that road upgrades, namely the installation of traffic lights at both Bankton roundabouts, must be in place before the 236th house on site was occupied. Detail of the works would be agreed between the applicant, council officials and Transport Scotland. Planning committee members unanimously agreed with this change.

Committee members also considered an application for a new home at High Street/Forth Street, North Berwick, which had been called off the Scheme of Delegation list by Councillor Jane Henderson because of concerns raised by local residents.

In the final close vote (six to five) members decided to refuse permission for the development. They felt that the height of the house was excessive and constituted over-development of the site; the proposed roof terrace would affect the privacy of neighbouring properties and the zinc cladding on the walls and roof terrace would be incongruous and harmful to the conservation area.

Members of the Highland Council’s Wester Ross, Strathpeffer and Lochalsh Committee have agreed that their share of extra Town Centre Funding will be used to support several projects in Strathpeffer.

The Scottish Government has allocated the council an additional £1,066,000 ring-fenced Town Centre Fund as part of its national economic recovery stimulus package, particularly aimed at supporting construction activity across Scotland. At this week’s Wester Ross, Strathpeffer and Lochalsh Committee councillors confirmed that their share of over £56,000 will go towards additional financial support to a project underway which is being led by the Community Council as well as helping kick starting several “shovel ready” ones.

£9,000 will be provided so the community council can purchase an additional pump to ensure the long-term operation of the fountain and waterfall cascade features, with £1,000 to go towards extending the electricity supply to enhance the new gazebo by providing powerpoints and lights.

As part of the Town Centre Fund requirements works must start in March this year and be completed by September 2021 the councillors were keen to support two local shovel ready projects put forward by the community council.

Following the Committee’s decision, £15,000 will go towards promoting local tourism and encouraging visitors to spend time in Strathpeffer and the surrounding area by improving signage and £28,000 will be used towards the cost of drainage works required at the site of the new community play park.

The residual balance of £3,104 will be held as contingency in case the actual costs of works associated with the projects exceed budget estimates. In the event that it is not required there is an opportunity to take advantage of and promote use of the improved Peffery Way - an all abilities route between Dingwall and Strathpeffer, with the Community Council using it as match funding to purchase an electric “trishaw”. The specific use of a “trishaw” would be to facilitate residents from local care homes accessing the countryside helping to improve personal well-being.

During lockdown, it will be the setting for around 50 keyworker and vulnerable children, with the whole school moving into the new building when restrictions allow.

The school can accommodate more than 400 pupils, including ASN provision for up to 12 pupils, with space for 40 children in the nursery.

Pupils can enjoy an external roof terrace and outside play areas featuring a secure area for ASN pupils, a multi-use games area (MUGA) and secure play area for nursery, as well as an outdoor classroom, orchard and planting to attract wildlife with bug hotels around the school grounds.

Ewen Fowlie, the hub North Scotland project director for the school development, said: “It is great to see Linkwood in use, even on a reduced scale, and playing its part in the community in the current restrictions. It is a fabulous building and when things return to normal, it will play a major role in south Elgin life for generations to come.”

Zetland Park in Falkirk is set to benefit from a funding award of just over £192,000. 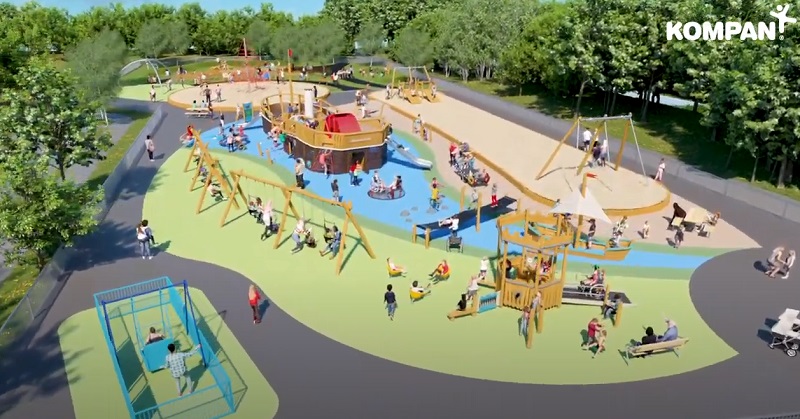 The additional cash was secured from the National Lottery Heritage Fund, and will support an uplift in capital works costs resulting from COVID-19 and the extension of the project’s activity plan until September 2022.

The inclusive play area will provide opportunities for all children no matter their ability or disability to play together and features a large replica of the Charlotte Dundas, widely regarded as the world’s second successful steamboat, which was built at Grangemouth.

The original project works and activity plan have been delayed due to COVID-19, however at the end of 2020 work got under way to build the playpark.

The National Lottery Heritage Fund’s total contribution towards the £2.24m project now sits at £1.12m following a previous award of £928k in January 2020.