Contractors preparing to begin construction as part of the Trams to Newhaven project will carry out investigation works at various points on the route from later this month.

Ground and site investigation work has been programmed for a number of locations between York Place and Newhaven, starting in Lindsay Road in the week commencing May 20.

Separately - but planned in conjunction with these works - the council’s roads team will shortly be embarking on a major road resurfacing project in a number of streets* surrounding the tram route.

The essential pre-enabling works programmed by the tram project’s Systems and Infrastructure contractor Sacyr, Farrans, Neopul (SFN) will involve SFN carrying out detailed ground investigation works in 25 separate sites along the route. The work will be carried out in sections of approximately 100 metres at a time and is programmed to be completed by mid-July 2019.

The purpose of these ground investigation works is to determine the ground conditions along the length of the new tram route so that the project’s final design can be confirmed.

SFN will check the ground conditions and depth of the bedrock along the route, for example to see how deep tram infrastructure foundations need to be, as well as the dimensions of the ‘slab track’ which will be laid under the tram track itself.

Meanwhile, the capital roads scheme works that are due to begin on Abercromby Place on May 27 have been brought forward from 2020 to make sure the road network surrounding the tram construction area is in good condition for when traffic diversions are put in place.

The work, part of the council’s investment in roads and footways across the city (£125m over four years), will include resurfacing the carriageway, pedestrian access and public realm improvements and traffic signal upgrades well as signalising the junction at Easter Road/Lochend Road and Duke Street.

Information about the ground/site investigation and road resurfacing projects will be communicated to directly-affected residents and businesses in advance of work starting.

A landmark affordable housing development in the Midlothian town of Penicuik has been officially opened by Kevin Stewart, minister for local government, housing and planning.

The Dalkeith-based housing association took over 2,023 properties from Scottish Homes almost 25 years ago, however in the following ten years almost a quarter of the original homes were sold through Right to Buy. But the launch of a successful new build programme in 2004 has now seen more than 450 Midlothian homes delivered over the past 15 years.

Made possible thanks to funding of £1.68m from the Scottish Government’s Allia charitable bond scheme, the development at Greenlaw Mill is made up of 24 high quality two bedroom flats, three of which are specially-adapted ground floor properties with wet room showers.

The Melville milestone of 2,024 properties was reached when Viviene Stacey moved in to her new two-bed flat with daughter Zoe. Following the completion of this latest development, Melville, Midlothian’s largest registered social landlord, now owns and manages 2,032 properties for rent.

The initial phase of a public consultation on proposals for the £30 million regeneration of the Bellsmyre area of Dumbarton has revealed overwhelming support with 97% of all respondents declaring their approval of the plans. 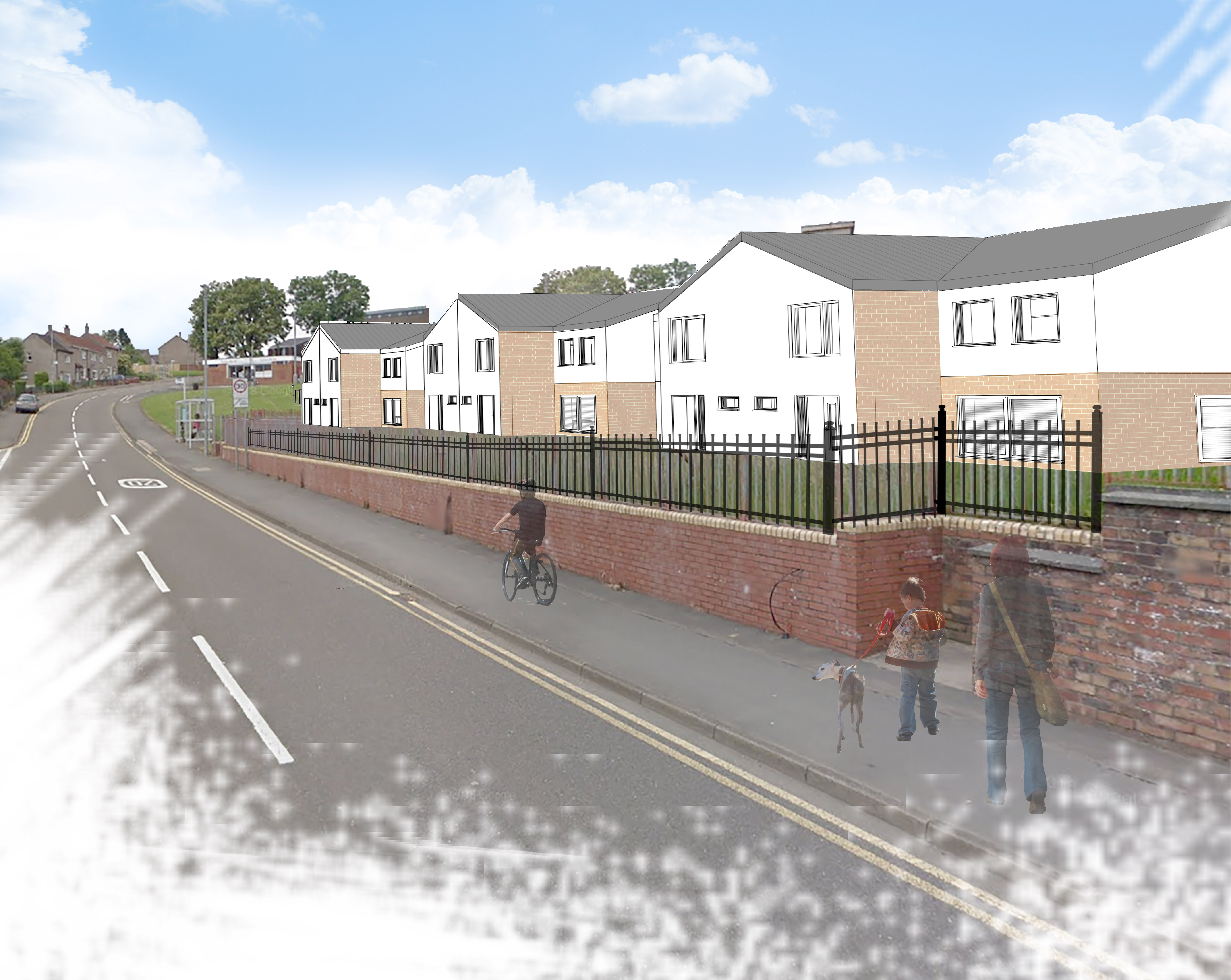 Bellsmyre Housing Association and its parent organisation Caledonia Housing Association launched the four week consultation in March following the unveiling of their ambitious plans to build more than 180 affordable two-storey homes to replace 225 traditional flats in the neighbourhood.

97% of tenants endorsed the plans and provided helpful feedback on their individual needs and aspirations, as well as what house types and design they would like to see in the neighbourhood.

As part of the consultation, the residents were advised that significant structural change for Bellsmyre Housing Association would be required to enable the proposals to proceed in their entirety. A separate consultation will take place with Bellsmyre tenants and owners on the effect of this change.

The total cost of the regeneration project will be in the region of £30m and will be funded through a combination of public and private funding raised by Caledonia Housing Association.

The final regeneration proposals will be announced to the Bellsmyre community in June.

The ongoing refurbishment works of Nairn Courthouse steeple have afforded the opportunity to examine the historic steeple close-up and to take in the expansive views over Nairnshire. 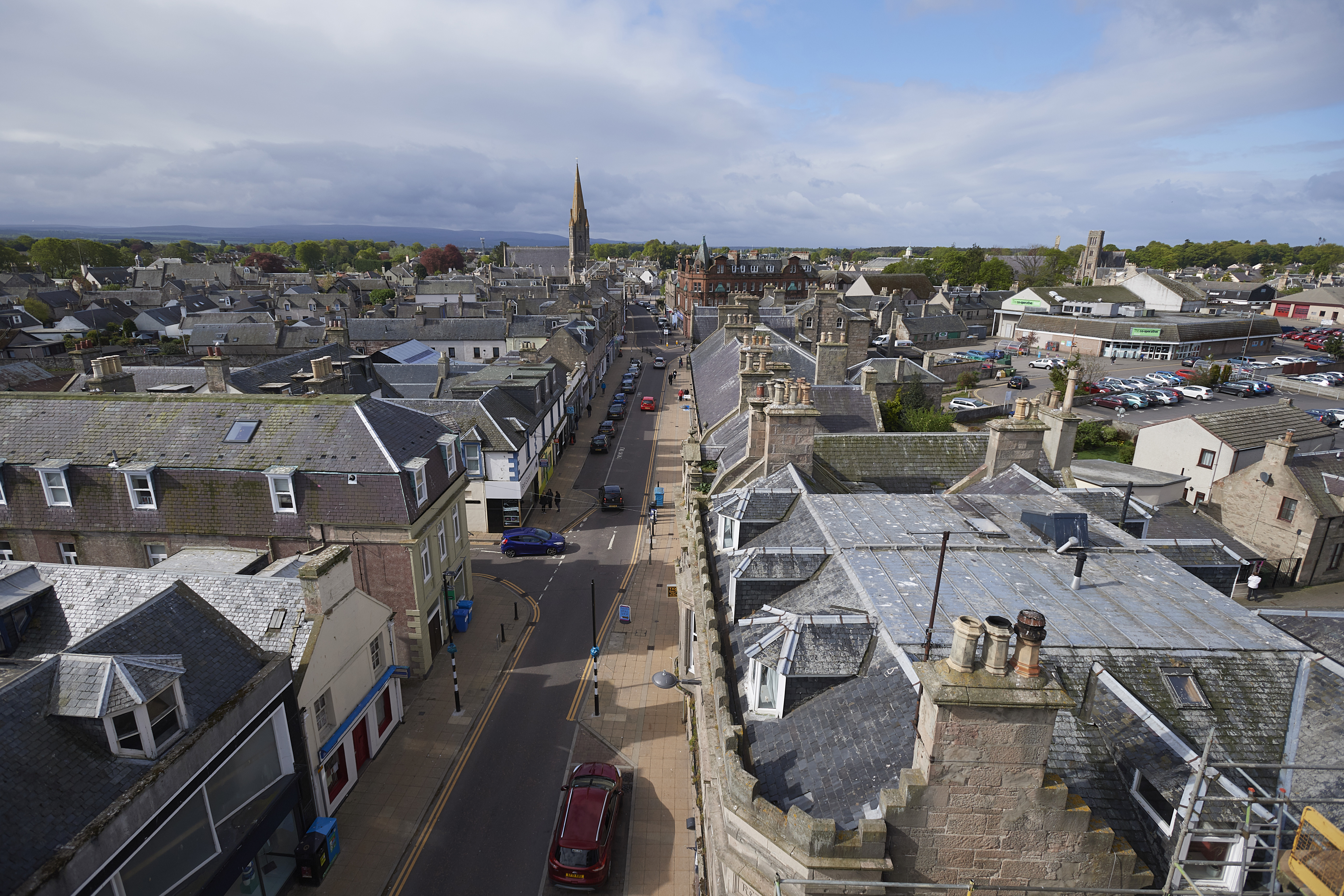 The contract for refurbishment works was awarded by the Highland Council to Laing Traditional Masonry Group (LTM Group).

The £809,000 project at the Category B listed Court House involves the renovation of the steeple built in 1860, as well as internal and external works to the building which dates back to 1818 on the site of the old toll booth.

Prior to 1860 the steeple was made of stone but was replaced with wood and iron. The steeple houses the cast iron bell (dated 1848).

The top part of the steeple, weighing six tonnes, from the level above the clock windows, will be lifted off by a crane on June 30 to enable renovations to the wooden structure. The wood will be replaced using Douglas Fir.

Cllr Heggie took the steps to the top of the scaffolding to hear first-hand about the ongoing work, viewing the clock windows, the bell and the gargoyles.

The Service Point and the Council offices will remain operational throughout the 48 week programme.

The works is being project-managed by the council’s Development and Infrastructure Service. The project has been progressed with assistance from LDN Architects, Fairhurst Engineers, McLeod & Aitken and Safehands Health & Safety Consultants Ltd.

Applications will soon open for a share of a £1.2 million fund to improve town centres in Moray.

Moray Council will welcome applications for turning empty space in Elgin, Forres, Buckie, Lossiemouth and Keith, into living space. Grants of up to 50% of project costs, capped at £150,000, are available for structural works, replacement windows, re-wiring and creating new entrances to properties.

Proposals to install transport hubs in Buckie and Elgin are also being considered. The £25,000 Buckie proposal would see the construction of a bus stop bay facing north on Barhill Road, to improve passenger safety when boarding and disembarking from the bus.

Meanwhile in Elgin the bus station would be transformed into a travel hub, with improved access for pedestrians and vehicles. A PA system would be installed, external lighting enhanced, and replacement seating and canopy. It’s estimated the works would cost £70,000, with match funding potentially identified from HiTrans and Stagecoach.

Smaller settlements with a population of 1,000 or more, which includes Lhanbryde, Burghead, Hopeman, Dufftown, Kinloss, Cullen, Aberlour, Rothes, Portknockie, Findochty and Mosstodloch, are also eligible to apply for money from the fund.

Money is available for improvements to shop fronts, as well as the installation of digital smart systems, for example those monitoring footfall, road traffic, air quality and more.

Roadshows will take place across Moray in May where those interested in applying for a grant can attend and questions about eligibility and discuss potential projects.

Work has begun to improve an area of Gretna after a group of community-minded individuals have joined together to make a real difference to an important local landmark.

Dumfries and Galloway Housing Partnership (DGHP) has linked up with the local Tenants and Residents Association (TARA), the local primary school, and The Devil’s Porridge Museum up to bring a fresh new look to an area locally known as ‘The Barracks’.

The former police headquarters in Gretna, The Barracks is a block of flats, originally constructed during the First World War as part of the larger development of the townships of Gretna and Eastriggs to house workers for the nearby munitions factory.

The building itself, now mostly owned by DGHP, was built to house a police force of around 150 women established to enforce discipline in the workforce. Following the end of the war, the buildings were disposed of by auction and The Barracks converted to flats.

A number of local residents became interested in the history of the building and, working in partnership with the local TARA, DGHP’s neighbourhood manager Crystal Pringle, and The Devils Porridge Museum, they have carried out extensive research before beginning a programme of improvements to restore the building to its post war appearance.

Crystal Pringle and community participation officer Gordon Williamson have been busy working with tenants, residents, and the local community to bring that to reality, with the project beginning last September (2018) and involving several months of consultation, planning, organising and sourcing items before work started.

Plans are now beginning to take shape with works are scheduled to begin shortly. The first works will see the removal of two trees to expose the original frontage returning the building to its distinctive wartime appearance. The next phases will involve pupils from the local school in the creation of commemorative artworks focussed on the heritage of The Barracks.

The group are also working in conjunction with The Devil’s Porridge museum to design display boards which will be situated on site to tell the story behind the building.

Owners and occupiers of historic properties can enjoy renovation advice from some of the country’s leading conservationists at a free event in Aberdeen.

Aberdeen City Council is hosting the Built Heritage Conservation and Community Engagement Workshop at the Music Hall from 6.30pm to 9.30pm on May 20.

The aim is to increase understanding of the work required in looking after older buildings and the contribution this makes to a more secure, sustainable and beneficial future for Buildings of Historic and Architectural Importance.

There will be a strong focus on the Union Street Conservation Area Regeneration Scheme (CARS), a £2.4 million grants programme jointly funded by the council and Historic Environment Scotland with further backing from Aberdeen Inspired, the Business Improvement District operator.

Union Street CARS grants can, subject to eligibility criteria, cover up to 60% of repairs and 75% of shopfront improvement costs, with owners expected to meet the rest. Conditions include a commitment to future maintenance.

Surveyors, architects, construction industry professionals, students and representatives of local heritage and regeneration groups are all welcome at the event, which will feature presentations followed by Question and Answer sessions.

The workshop has been developed and will be led by Dr Marc Ellington, the executive director of the Scottish Traditional Skills Training Centre.