A £314 million plan to transform Edinburgh city centre over the next 10 years has been submitted for approval. 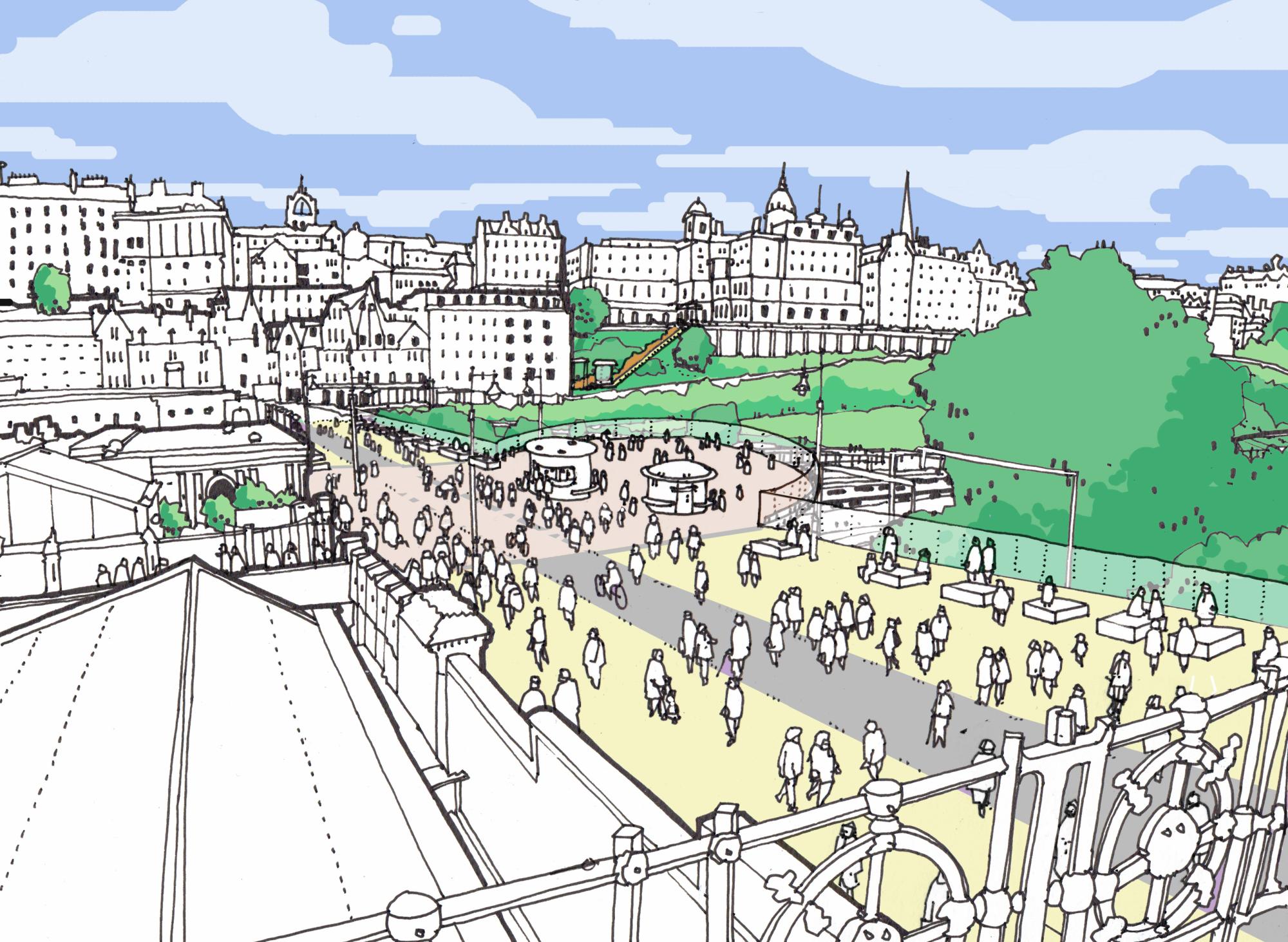 The Edinburgh City Centre Transformation Strategy (ECCT), which has been developed by the City of Edinburgh Council, already has full funding in place for the first five years. It is estimated the strategy will deliver £420m of benefits over a 25-year period through investment in improved public spaces, inclusive access and prioritisation of travel on foot, by bicycle and on public transport.

A ten-year Programme Delivery Plan has been developed, highlighting projects to be implemented during the first five years, which include the creation of a pedestrian priority zone in the Old and New Towns.

Responses to an ECCT consultation demonstrated strong support for the ECCT vision, with 80% agreeing with proposals for vehicle-free streets, a pedestrian priority zone, public realm enhancements, a fully-connected cycle network, a city centre hopper bus and public transport interchanges. Seventy-five per cent backed plans to reduce access for private cars and the closure of Waverley Bridge to traffic to create a public plaza.

Feedback has informed final updates to ECCT, including:

Projects to be delivered over the first five years of the ten-year strategy are already broadly fully-funded through developer contributions, match-funding grants from Transport Scotland through walking and cycling charity Sustrans’ Places for Everyone scheme and the City of Edinburgh Council’s capital programme. Amongst initiatives already underway as part of the strategy are the George Street and New Town (GNT) public realm design project, which recently benefited from £20m funding through Places for Everyone and plans to transform walking and cycling provision between the Meadows and George Street.

Councillor Lesley Macinnes, transport and environment convener, said: “It’s clear that there’s widespread public support for our ambitious plans for City Centre Transformation, which will be game-changing in terms of the way people move around our city, how services are delivered and the positive impact it will have on quality of life for everyone who lives, works or visits here.

“This is a major project, which will require significant investment, but the project team have worked hard to ensure that funding for the first five years is broadly already in place. There is no doubt that its implementation is crucial considering the benefits that will be delivered – we simply can’t ignore the need to change the way we use our city.

“With our population set to expand rapidly over the next 20 years in the face of various challenges, including the increasingly urgent issue of our climate emergency response, this strategy will help us to build resilience, making sure Edinburgh’s centre continues to thrive, delivering economic, social and environmental benefits for everyone.”

John Lauder, deputy CEO of Sustrans, said: “The City Centre Transformation is a bold, forward-looking step to reduce emissions, improve air quality and deliver a more liveable city for visitors and residents alike. We’re pleased to have supported the development of the City Centre Transformation, and look forward to continuing to work with the City of Edinburgh Council to make George Street and the New Town a place for everyone.”

It is anticipated that the remaining projects in the second five years of the programme will be delivered with the continuation of funding through the council’s capital programme, developer contributions and match funding applications to Transport Scotland, Sustrans and other organisations.

Progress toward the successful delivery of the ECCT strategy will be closely monitored throughout the 10-year programme, with regular updates to committee based on both quantitative and qualitative indicators. As well as tracking public perception, real-world indicators such as bus patronage, the share of modes of transport used by commuters and footfall in catalyst areas will be continually monitored, informing the ongoing delivery of the plan.