Design changes for the £9 million public realm project on Byres Road have been approved by Glasgow City Council.

A consultation in 2018 on initial design proposals for the street demonstrated public support for measures to improve the pedestrian environment, however there was significant concern about the quality of the proposed cycle infrastructure with the lack of physical segregation between cyclists and motor vehicles identified as the main issue. 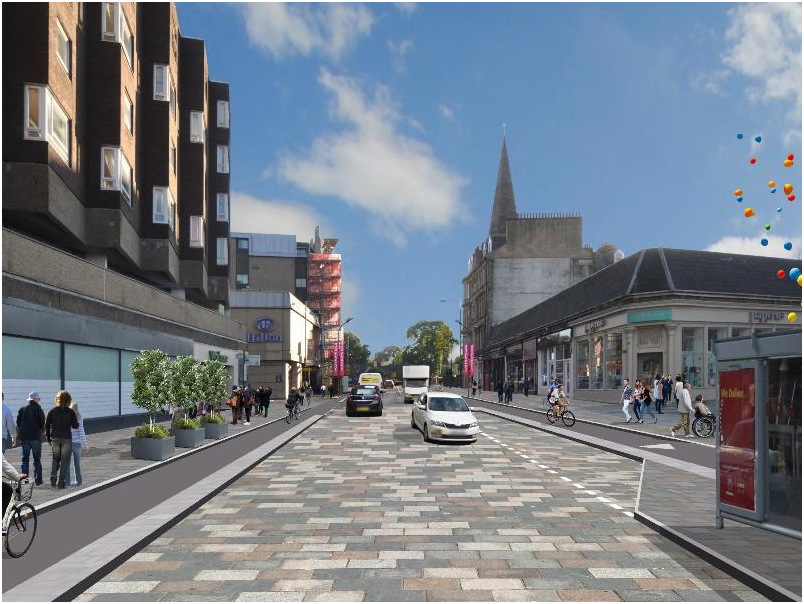 In October 2018, the council’s housing, neighbourhoods and public realm committee instructed that design proposals were revised to include segregated cycle infrastructure along the full length of Byres Road.

The Byres Road public realm project is jointly funded by the UK and Scottish governments through the £1.13 billion Glasgow City Region Deal.

The revised designs retain many of the positive features of the original scheme including the introduction of a 20mph speed limit, upgraded footways, and the introduction of additional seating area, but now also incorporate a range of features to improve conditions for those on bikes, including protected cycle lanes; bus stop bypasses; and physical segregation at the Hillhead Subway taxi rank.

The form of the cycle lanes to be introduced will be decided upon following consideration of the respective merits of footway-level and stepped Copenhagen-style cycle lanes.

Bus stop bypasses - routing the cycle track behind the bus passenger boarding area to maintain the separation of cyclists and motor traffic - have been included in the revised design to minimise the risk of conflict between these transport modes.

The introduction of kerbed segregation and drop bollards at the Hillhead Subway taxi rank will restrict the use of the rank to licensed hours only (6pm - 2am) minimising the risk of conflict between taxis and cyclists, especially during peak commuting hours.

The revised designs will result in the road space being reduced by approximately 30% with that space used to provide wider footways and protected cycle lanes.

The design considered in the public consultation proposed a reduction in on-street car parking from 117 to 49 spaces, and the revised design reduces this further to 42 spaces. Given concerns raised about this reduction by local businesses and recognising their importance to the vibrancy of Byres Road, additional consideration will be given to options for increasing parking space within the wider area. Loading bays will provide space for an additional 56 cars after-6pm to support the night-time economy.

This public realm project will complement other City Deal projects between the West End, the Clyde - and across the river into Govan - and the redevelopment of the University of Glasgow campus.

Carol Connolly, head of City Deal at Glasgow City Council, said: “The new public realm at Byres Road will improve the experience of the area for all those who live there or use it for shopping, studying, or going out to eat and drink. Byres Road is one of the most popular destinations in the city for both Glaswegians and our visitors, and this public realm work will ensure it maintains this position. The public consultation saw a wide range of views expressed, and the revised designs reflect this.”