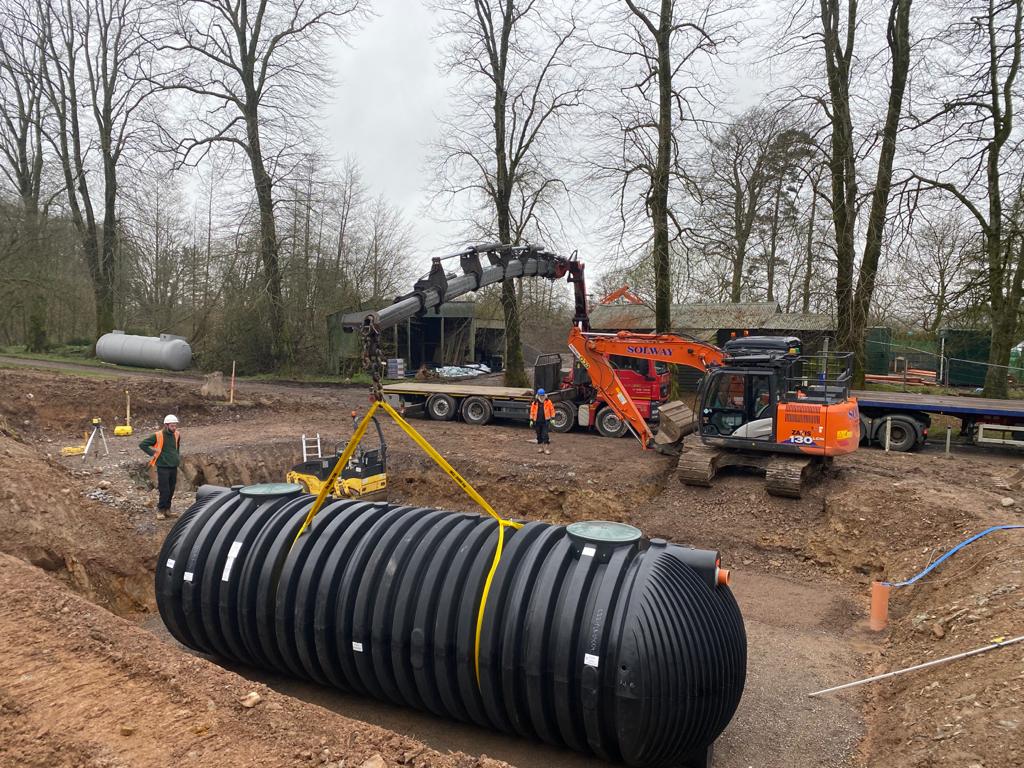 A new sewage treatment system from Graf UK is helping the National Trust for Scotland protect the water environment and minimise its carbon footprint.

The old system at its unique Threave Garden and Estate property in Dumfries and Galloway was feeling its age after more than 20 years so sustainable drainage design specialists Moir Environmental, who have worked with the Trust for more than 10 years, were called in to design a replacement.

This makes the Threave project the biggest Moir Environmental have delivered with Graf UK and is also one of Graf’s largest projects. The system at Threave drains to a pumping station (not Graf’s) and from there to a new, vertical-flow, sand-media reed bed.

“The final effluent which is being discharged into the local environment will be of exceptional high quality, crystal clear in appearance, and with almost zero impact on the local water environment,” said Stewart Moir, MD of Moir Environmental, who have spent three years working with the National Trust for Scotland at Threave. 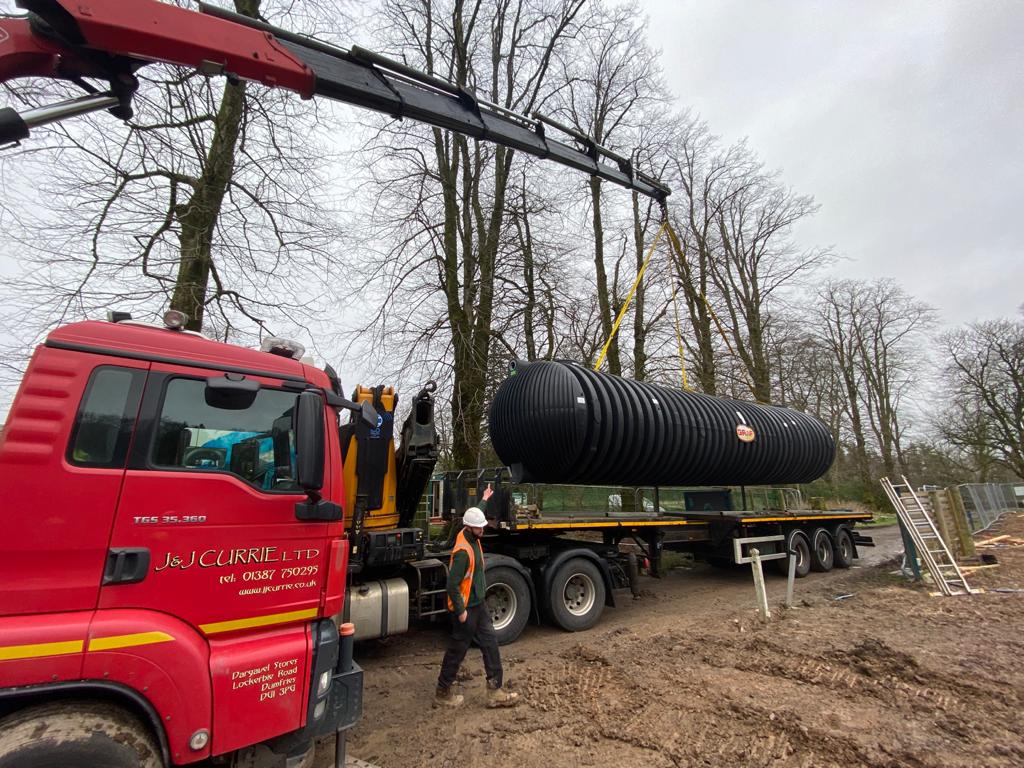 Effluent quality is not the only benefit from using the Graf UK system though.

“Another big saving is the tanks don’t need emptying as frequently so tankering costs are less and tanker movements are fewer so in the future for the client and the environment there will be fewer tankers moving about. That’s a vastly reduced CO2 footprint,” he added.

“There is nothing electrical or mechanical inside the Graf tanks so they are simple in their design and should be cheaper to repair if required in the future. A lot of specifiers don’t take account of this. There are a lot of sewage treatment plants on the market, but the Graf tanks were considered overall to be the best for this site.”

Graf UK’s sewage treatment plant has been sited to serve the Terrace Café and visitors centre at the top of a hill but as it also services the Stables Café and toilets at the bottom of the hill, a pumping station was required to pump some of the sewage to the sewage tanks.

Stewart Moir added: “Another advantage of the Graf UK system on a site such as Threave is that visitor numbers can vary widely day-to-day over busy periods during Easter and school holidays, but because it is a SBR process it can cope better with these fluctuations in loading.”

The SBR tanks are fitted with fine bubble diffusers located 100mm above the base which drive the mixing and aeration processes. Air lift pumps transfer the crude sewage from the primary holding tank into the SBR tanks and pump out the effluent while also encouraging increased oxygen transfer and mixing. 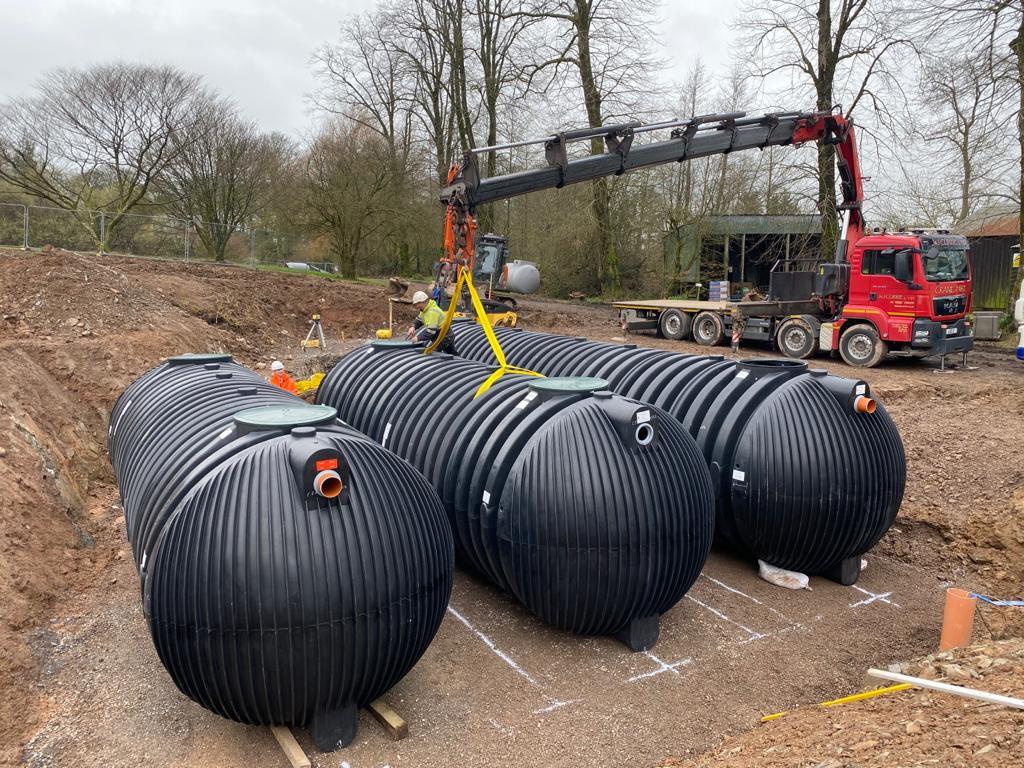 The new plant at Threave had to be built on the site of the old one, but its 14.3m x 9.7m (x 3.4m deep) footprint is smaller. Work was due to start in March 2020 but due to the first Covid lockdown, was postponed by over a year.

Following a tender process, civil engineering contractor RH Irving Construction, who had not installed Graf UK systems before, had a team of up to 12 on site, using 13-tonne excavators, six-tonne dumper trucks, trench roller and surfacing machine, for two months. Once the tanks had been lifted onto a stone base by a HIAB, the excavation was backfilled with gravel.

RH Irving director John Birkett said: “This project had many challenges. There was rock in the ground and we had to clean the gravel from the former reed beds to re-use them. We also had to install two pumping stations as well as the large-volume Graf tanks away from the road.

“But the Graf UK plant did what it said on the tin and their local representative Lisa Rossi was very good, arranging tank delivery when required. The tanks went to her yard first from Germany and were then brought to site in one day.”

Stewart Moir, who founded Moir Environmental in 2003, added: “We know the client is very happy. It is intended to enhance the project by sowing wildflowers on the surrounding area affected by the works.”

Threave Gardens in Castle Douglas is a world-renowned garden and wetlands nature reserve. It is also the only Scottish garden dedicated to the training of horticulturists and as such has been the home of the School of Heritage Gardening since 1960. It also features Scotland’s only bat reserve.

As well as the gardens, the beautifully restored Scottish baronial Threave House and Terrace Café are also a spectacular venue for weddings, corporate events and private parties.

“As Scotland’s national conservation charity, the National Trust for Scotland wants to lead by example, and we’re so pleased that this project will help us better operate an environmentally sustainable business.”

Graf UK systems help the National Trust for Scotland with its carbon footprint And finally... Hand-built by robots Graf UK steps up for the Sands of Luce