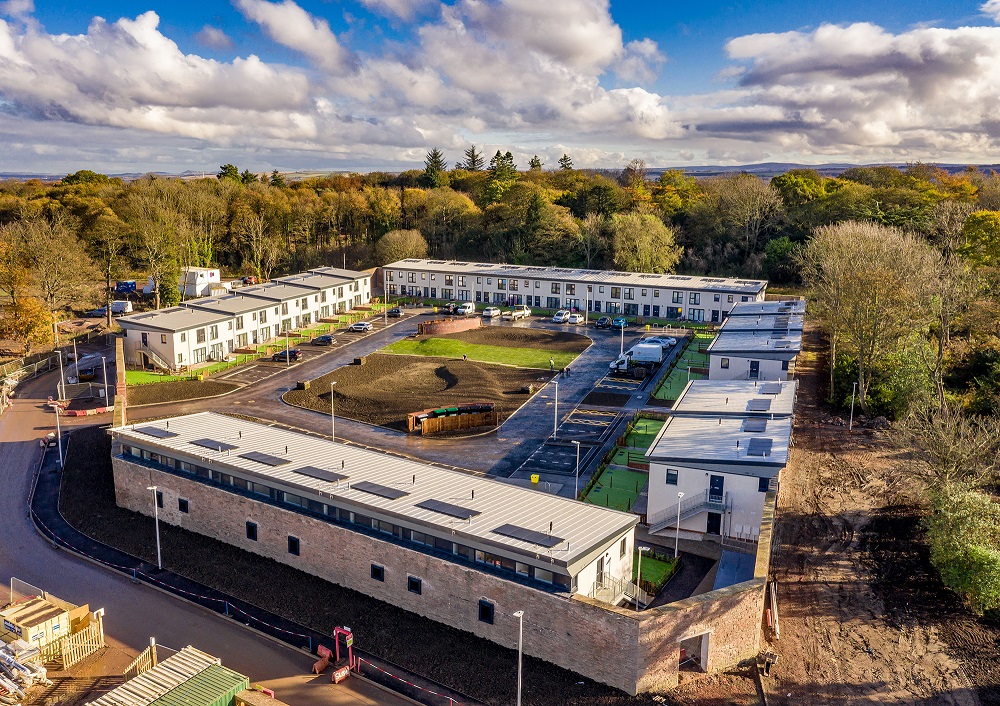 The 47 homes, which were delivered by the Cruden Group, have been innovatively constructed using the historic wall as an integral part of the structure of the new homes.

The homes, which offer a mixture of one, two and three bedrooms have been built facing into the old walled garden compound, with the historical structure forming the rear wall of the properties.

Of the 47 affordable homes, 28 are for social rent while 19 have been developed for mid-market rent - an initiative that offers good quality affordable properties for working people on a modest income.

A total of £2,106,720 of funding was provided by Scottish Government for the social-rent portion of the development under the Scottish Government’s Housing Investment Programme, which aims to drive delivery of 50,000 new affordable homes in Scotland.

A further £944,794 of government funding was provided for the mid-market rent portion, meaning a total of £3,051,514 was provided by the Scottish Government for the project.

The affordable homes also form part of a wider development featuring 28 properties for private sale by Cruden Homes on the old Edmonstone Estate.

Construction on the project began in May 2018, and the new homes have already scooped Police Scotland’s Secured by Design Gold Award. The national police initiative encourages developers to create housing projects with security in mind, using landscaping that promotes natural surveillance, as well as high-performance windows and doors to help prevent break-ins.

Visiting the new affordable development, Mr Stewart said: “Everyone deserves a safe, warm, affordable place to live, which is why we’re committed to delivering 50,000 affordable homes by 2021. We rely on the hard work and support of housing associations like Hillcrest to deliver quality developments like these to help us achieve our ambitious target.

“I am impressed by the way these 47 affordable homes for social and midmarket rent have been integrated into the walled garden that was once part of Edmonstone House. Backed by £3 million of Scottish Government investment, these unique homes will transform the lives of their tenants by giving them a sense of identity and belonging, and contribute to a vibrant community with strong links to its history.”

Alan Russell, Hillcrest chairman, added: “The wall of Edmonstone Estate’s historic garden is a nod to the extensive heritage of the area, and we’re delighted to have been able to preserve and respectfully incorporate this piece of history into these new homes.

“Not only has the inclusion of the wall into the design of the properties resulted in unique and innovative homes, it also gives the area a fantastic identity all while helping boost Edinburgh’s affordable housing provision.”

Steven Simpson, Cruden Homes’ managing director, said: “We were delighted to welcome Scottish housing minister Kevin Stewart to Edmonstone. This project presented an exciting development opportunity for the Cruden Group to deliver a mix of private homes for sale and affordable housing for Hillcrest, in a truly unique setting.

“As with all Cruden Homes developments, securing desirable and interesting locations is key and Edmonstone is no exception. The range of product and tenure, combined with the heritage of the site and the mature natural environment, has generated a sustainable new community that has proven extremely popular with those who reside here.”

Councillor Kate Campbell, Edinburgh’s convener of housing, homelessness and fair work, added: “We need to address the huge housing pressures facing our city and we’re doing this in partnership with housing associations and the Scottish Government to boost housing supply.

“With so many people in need of a safe and warm home I’m pleased to see yet another key development reach completion in Edinburgh. It’s all part of our major programme of investment towards improving services for existing and future tenants and investing in much needed affordable new homes.

“I’d like to congratulate Hillcrest on reinvigorating this heritage site into such a fantastic place to call home - I hope all residents enjoy settling in to their new community.”

The original Edmonstone House, which once stood at the site was believed to have dated back to the 13th century and was occupied by the Edmonstone family until 1626, when it was sold by Andrew Edmonstone to James Rait.

In the 18th century, the Wauchope family, who now owned the estate built a new mansion house on the site of the previous one. The house was demolished in 1950 with only the walled garden and other ruined structures such as stable houses and an ice house surviving.