Low carbon technology is to be used in a residential development for the first time in Scotland under plans submitted for more than 500 homes on the outskirts of Aberdeen. 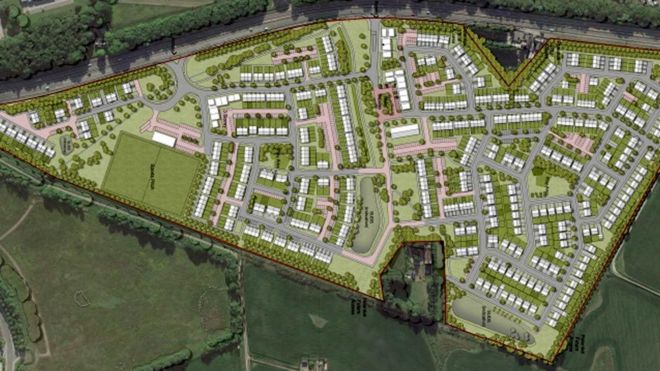 Cognito Oak LLP, a partnership between Henry Boot Developments (HDB) and Wraith Real Estate, is behind £110 million proposals for 550 homes on land at Cloverhill, Bridge of Don, to the east of the A92 Ellon Road.

Under the plans, a mix of flats and semi-detached, detached and bungalow properties will be developed alongside sports pitches, community facilities and retail space for a convenience store, cafe and hairdresser.

Cloverhill would be built in three phases, with around 145 affordable homes being constructed first, followed by more housing and then the flats and sports pitch, which would be home to junior football club Bridge of Don Thistle.

Planning documents lodged with the council said some of the homes could be powered by hydrogen fuel cells.

There will also be a new signalised junction installed if the plans are approved, with pedestrian crossings and a reduced speed limit.

“This will act as a pilot scheme from which performance data will be gathered to allow the independent analysis of the performance of this technology, facilitate comparison against alternative low carbon technologies and help inform decisions regarding its integration into future developments in the city.

“The pioneering, independent testing of a low carbon technology in a residential development would represent a first for Scotland.”

It added: “The vision for Cloverhill is to create a new sustainable community, sitting between Bridge of Don and Aberdeen beach, providing a high quality, sustainable and healthy lifestyle for its residents, businesses and the wider community.”

Nigel Munro of Henry Boot Developments said: “Our proposed development offers an opportunity to help to address the shortfall of housing delivery in the Aberdeen area, which has failed in recent years to keep pace with the required numbers.

“Following the consultation events earlier this year, we have listened to the feedback provided and we have worked hard to put together a development that not only provides new homes, but also the infrastructure – parks, community space, shops and sports facilities – to build a thriving community. It’s great to see the development take this next step forward – it’s a scheme that will be hugely positive for the local area, not only providing much-needed new homes, but creating a great place to live and making a positive contribution toward the wider Bridge of Don area.”