The cables on the north tower of the Queensferry Crossing are to be cleaned as part of a trial to measure the impact of soiling on the formation of ice. 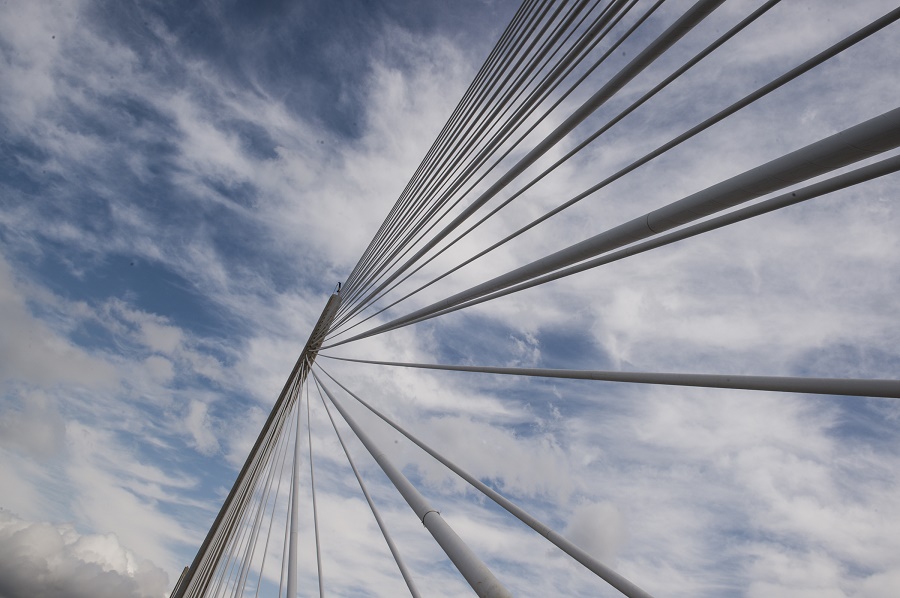 Teams of rope access technicians will abseil from the top of the 207-metre concrete tower and use soap and water to wash down the high-density polyethylene sheaths that encase the steel strands of the cables.

The work commenced this week and will take five to six weeks to complete. Ninety-six cables ranging in length from 94 to 420 metres will be cleaned – over 24 kilometres in total.

A 40mph speed limit will be in force on the bridge for safety when rope access teams are working overhead, from Monday to Friday between approximately 07:00 and 18:00.

The Queensferry Crossing has had to close to traffic in adverse weather three times since it opened in 2017, due to a risk of ice falling from the cables and towers. Since then, a team of engineers led by Transport Scotland’s operating company BEAR Scotland has been investigating potential measures to mitigate or prevent the problem.

The team has identified soiling of the cables as a potential catalyst for the formation of ice and is now taking forward trials to test this theory.

Chris Tracey, BEAR Scotland’s unit bridges manager for South East Scotland, said: “Since the Queensferry Crossing opened to traffic, dust and dirt has accumulated on the cables. These tiny particles may be helping ice to accrete as crystals form around them.

“The first cables were installed in 2015 and there are no records of any ice forming on them until 2019.

“By cleaning the cables on one tower we will be able to measure the impact this has. As part of the project, thermal cameras are being installed at the top of each tower to monitor and measure any formation of ice.

“On this occasion the cleaning will be carried out by rope access technicians, however work is also progressing on the design of a machine to carry out this task in future, should the trial prove successful.

“We appreciate that some drivers may find the reduced speed limit during the works frustrating, however this is an essential safety measure and will only be implemented when necessary.”

In parallel to the trial taking place on the bridge, tests are also scheduled in October at the Jules Verne climatic wind tunnel, a research facility at the Scientific and Technical Centre for Building (CSTB) in Nantes, France. This major research facility can replicate all kinds of weather conditions, including different atmospheric phenomena occurring simultaneously. This will allow the BEAR Scotland team to test the impact of cleaning and of specialised coatings and deicing compounds on a full-size section of Queensferry Crossing cable.

Chris Tracey added: “We’ve already installed a range of sensors to measure the conditions in which ice forms, and these trials will further improve our understanding of the process. The ultimate aim is to design measures to mitigate or prevent the problem.”