A rail workers union has called for an urgent investigation following a devastating blaze at Troon railway station as the line through the station prepares to reopen tomorrow. 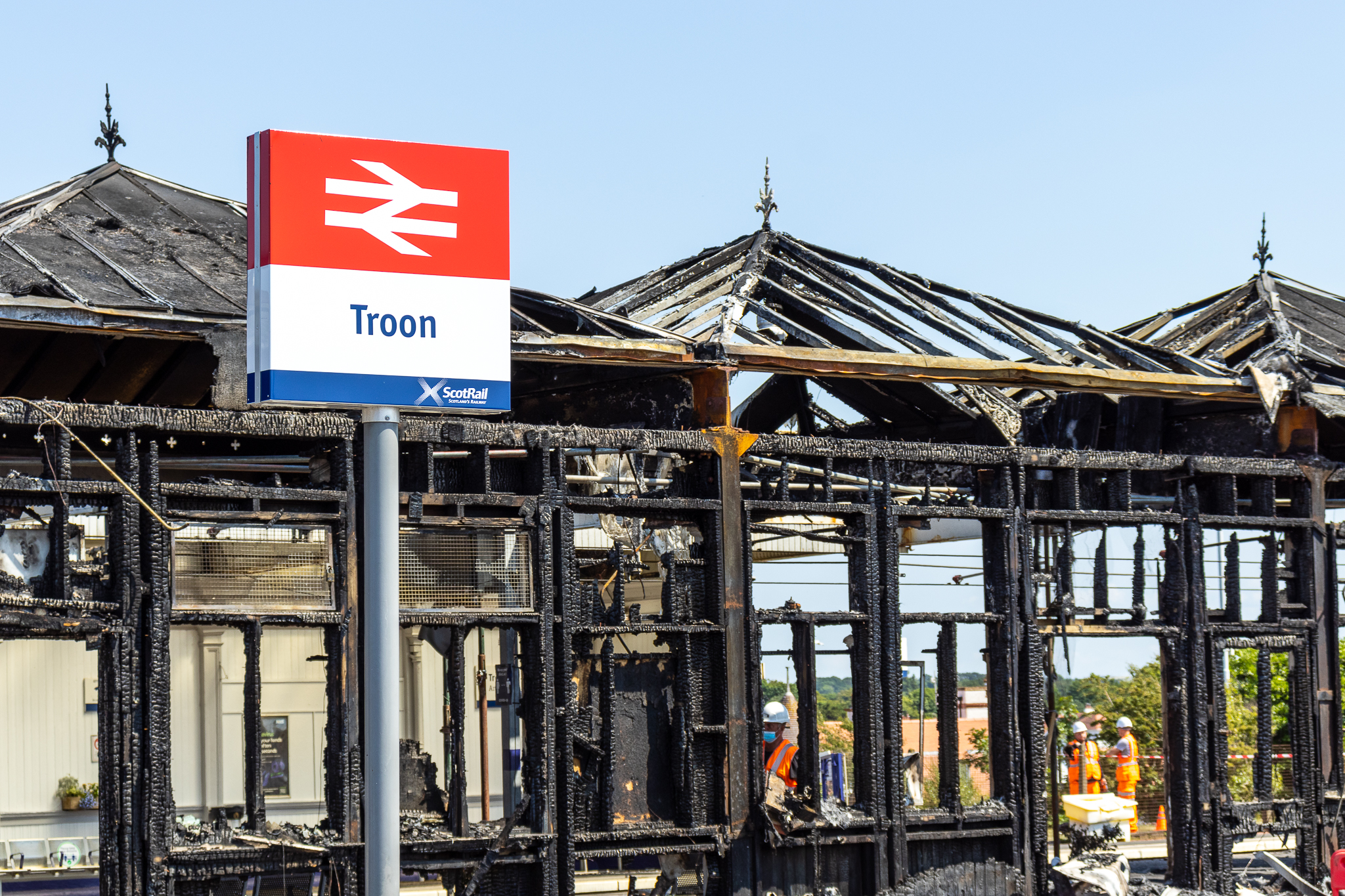 Trains have been unable to pass through the Ayrshire station since a serious fire badly damaged station buildings on Saturday, July 17.

No train services will stop at Troon, where engineers are continuing their work to make the building safe and fully assess the damage to the building, platform canopies, overhead power cables and other infrastructure.

Special props have been designed and installed on Platform 1 to support the beams over the tracks, which overhead line equipment is attached to, and new overhead power cables have also been installed.

Work has continued today to install similar supports on Platform 2 before track-level repairs commence over the next 24-hours ahead of the reopening of the line through the station.

The National Union of Rail, Maritime and Transport Workers (RMT) has now called for an investigation, having raised concerns over a lack of staffing at the station.

RMT general secretary Mick Lynch said:  “The devastating fire at Troon station shines a light on just how dangerous the rail industry’s plans to de-staff our stations are.

“Unstaffed stations not only discriminate against those with accessibility issues but also pose serious health and safety risks for passengers and other rail workers.

“Station staff play a vital role in helping deliver a safe, secure and accessible railway and it is long overdue that this cost-cutting, profit maximising measure of de-staffing our stations and trains by privatised Train Companies and the rail industry was stopped in its tracks due to glaring and serious health and safety risks.

“Today I have written to the chief inspector of railways demanding he launch an urgent investigation into the Troon Station fire and the wider programme of de-staffing our stations which is only likely to accelerate due to the Government’s and privatised rail industry’s cuts agenda.”

Liam Sumpter, Network Rail route director for Scotland, said: “Our engineers have delivered a rapid response in very challenging circumstances to safely repair and reopen the line through Troon. Our priority now is to get trains back on the move for our passengers and freight customers as quickly as we possibly can.

“The damage caused by Saturday’s fire was extensive and we must make sure we have carried out all necessary safety checks, and made vital repairs, before we can run trains through this section of track.

“We are working intensively to restore services as quickly as we can on both the overall line and for Troon-based passengers.”

David Simpson, ScotRail operations director, said: “This was a terrible fire which caused dreadful damage to the station buildings at Troon and severe disruption to rail services in Ayrshire.

“We regret every closure to the rail network which impacts on our customers and we are delighted that the track through Troon station is due to open again on Friday.

“While our Network Rail colleagues have been working hard to make the building, platform canopies, overhead power cables and other infrastructure safe, we have been producing a plan that aims to have train services running normally again as quickly as possible.”