Spencer Group will carry out the £18 million package of works over a four-year period in the latest stage of a long-term relationship with the bridge, which spans the River Clyde near Glasgow.

Opened in 1971, Erskine Bridge is the longest cable-stayed bridge of its type in the world at 1.3km and was last year awarded Category A status by Historic Environment Scotland in recognition of its special architectural interest.

Spencer Group has carried out a series of projects on the crossing, dating back almost 20 years, including designing, installing and maintaining four impressive under-deck gantries to allow year-round access for maintenance and repairs. The latest project follows works to inspect and recoat the stay cables.

Now Spencer Group has been awarded a contract by bridge owner Transport Scotland to deliver an extensive programme of maintenance painting. Scotland Transerv is the principal designer and the engineer managing the works. COWI (formerly Flint and Neill) were appointed as technical experts to assist Scotland Transerv produce the design and will assist management of the works.

The works will be delivered in four phases, beginning immediately, and will include:

The works will also involve the refurbishment the bridge’s footpaths and removal of redundant gas mains.

It comes after Spencer Group recently completed a £10m project to complete repair works which followed a fracture that caused the closure of the Forth Road Bridge near Edinburgh. That scheme involved the replacement of the truss end links, which connect the bridge deck to the towers, with a unique new sliding bearing system designed by Transport Scotland’s consultants Fairhurst. 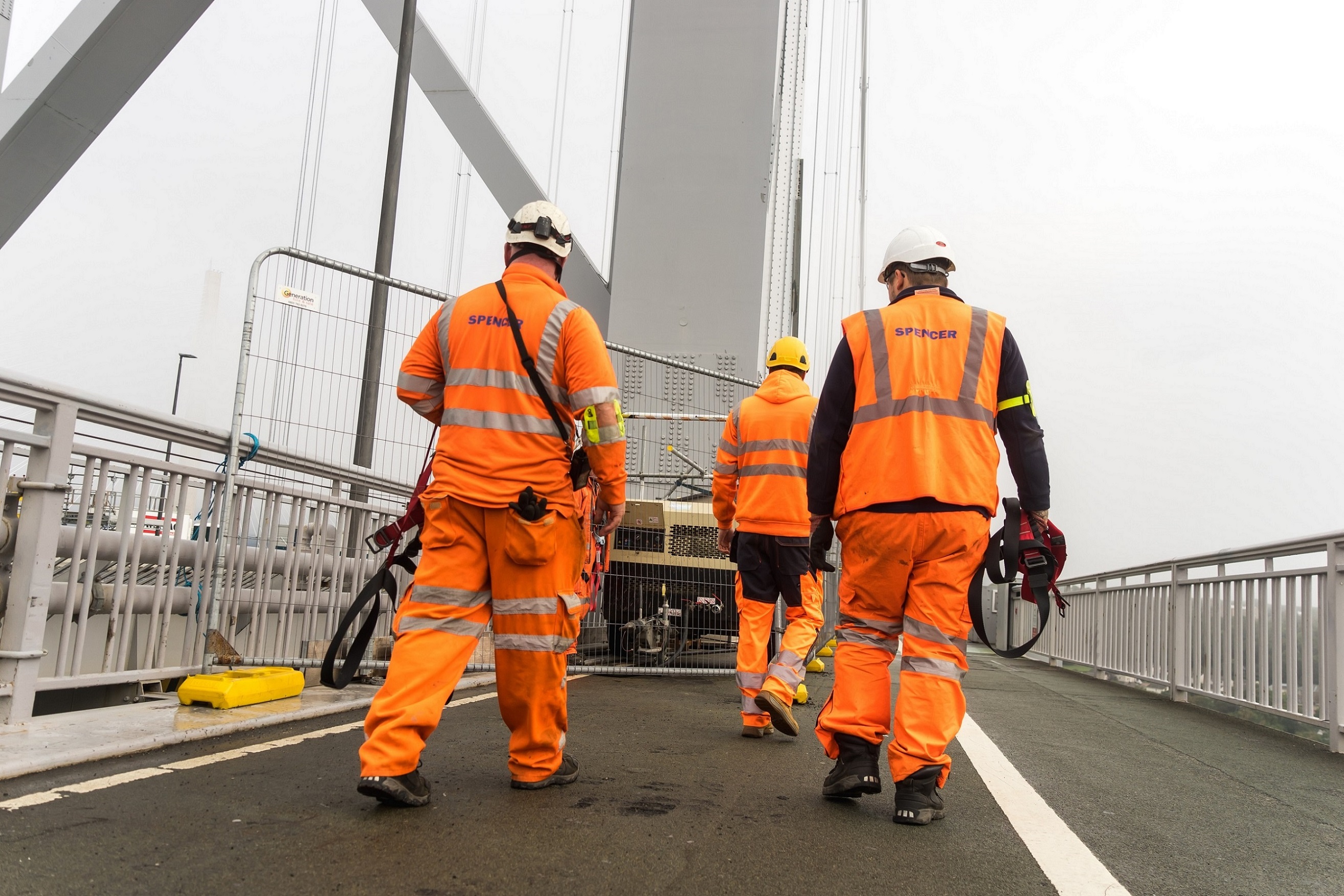 The Erskine Bridge works will be the most extensive maintenance painting of the landmark crossing for a generation.

The project will involve Spencer Group teams applying 46,000 litres of paint across every part of the structure’s steelwork, from the bridge deck, 60 metres from the river below, to the towers a further 40 metres above. In all, that’s 60,000 square metres of the structure to be painted.

During abrasive blasting processes and spray painting, sections of the bridge will be wrapped in a high-strength tent that will capture all the residue and ensure minimal impact on bridge users, trains on the rail line running below it, or river traffic. It will also prevent spillage into the River Clyde.

Bridges projects manager James Barnes said the Spencer Group’s plan for the works offered Transport Scotland quality, value and a solution that will minimise impact on journeys across the bridge.

He said: “Transport Scotland is committed to the high-quality, long-term maintenance of the bridge, in the interests of travellers and the Scottish economy, while minimising disruption to the public.

“Our approach to the project is to limit the amount of time we will occupy the carriageways on the bridge.”

Cameron Gair, head of major bridges and bridges asset management for Transport Scotland, said: “This project is the latest major example of our commitment to investing significantly in the proactive and strategically planned maintenance of Erskine Bridge.

“Following their success in the recent tender competition, we are pleased to have appointed Spencer Group to undertake this package of maintenance works and we are looking forward to working with the Spencer team.”

Peter McCann, major bridges manager for Scotland Transerv, said: “Erskine Bridge is a major strategic structure and an important part of the Scottish road network, used by more than 40,000 vehicles a day.

“This multi-year maintenance painting programme will continue to ensure the bridge is maintained to excellent standards while keeping the impact on users of the bridge to an absolute minimum.”

The company has recently delivered another major maintenance project, on the Humber Bridge, close to its headquarters in Hull. This project involved the design and construction of a bespoke access platform, which allows engineers to access, inspect and replace the bridge’s “hangers” – the super-strength, high-tensile steel ropes that suspend the bridge deck from the main cables.

In addition, Spencer Group has designed an innovative under-deck gantry for the Kessock Bridge, near Inverness, for BEAR Scotland, on behalf of Transport Scotland. The motorised gantry, which is currently being fabricated, will enable easier, year-round access for maintenance.

Mr Barnes added: “Our extensive and proven track record over many years has given us unrivalled expertise in bridge projects such as this.

“Clients know they can rely on us to find innovative ways of delivering engineering and maintenance works in very difficult environments, working at height and on critical parts of the transport network, while always making safety our foremost priority.”